At the blink of an eye, our lives become ALL about our kids: 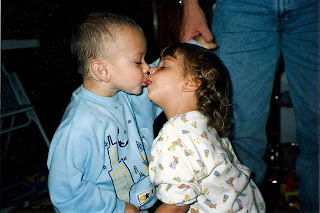 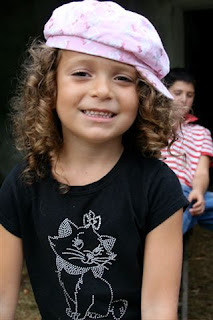 Paula, Julie, Lydia, Niki, Dad, etc. sent me invites to Facebook.com - even Amy Cohen Effron invited me, but I never clicked on that button...no time. After feeling like scum because I've been neglecting my friends, I finally clicked, surfed and freakin' screamed. Luca ran to the computer, saw my face, rolled his eyes and said, "See ya in another year!"
Oh
My
God

There is nothing like seeing the faces of people you haven't seen in about twenty years, I even found a long lost friend from Elementary School which would make it about thirty years. *feeling ancient* 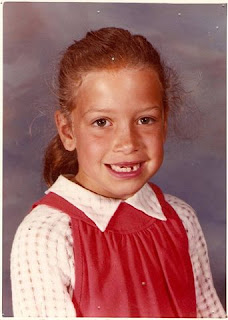 Nikki, a friend from high school, called me *glamazon* *smile*
I AM HAVING SO MUCH FUN! 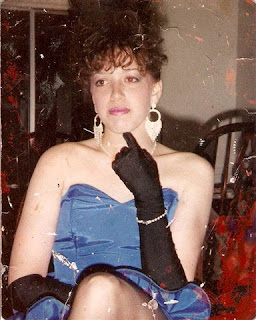 Junior Prom (I can't believe I'm showing this picture)
Once upon a time I lived in a sorority house at the University of MD College Park with thirty-five other girls, always an outfit to wear to go to the Vous. My first roommate was a blonde, crazy chick named Willner who wore electric blue mascara, Edwins, (and what the hell were those cowboy boots called?) smoked capris and was the first person I'd ever seen with acrylics. SHE was supercool, on the phone til late at night with what-the-hell-was-his-name, oh YEAH! Port, Jason Port- the Port-o-dog get yourself a hot dog outside the Vous guy. (couldn't stand him) Actually, if I recall correctly, he sent the police to the AEPhi house at 3 in the morning for harrassment, he was such an ass. I'm sure he has since become a model citizen.

Then, there was Karen Sher. The first day I met her she told me she loved my watch. I said "Thanks." She said, "It's a Movado." I said, "It's just got a dot on it." I never lived it down and she made fun of me because I was from Pikesville and not Long Island. I called her Shirley and she called me Muffless (that's another post-Vous, post-atomic wings, hang out in the kitchen drunk over Little Charlie's pizzas story). When she stole the stuffed animal that Luca had sent me from Italy and spread the vicious rumor that Luca did not exist, 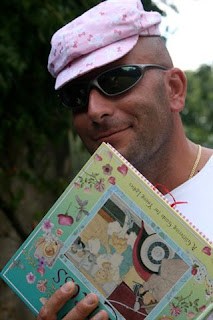 it was all-out war. As I was walking home from class, I noticed my stuffed animal hanging from the roof of the House. 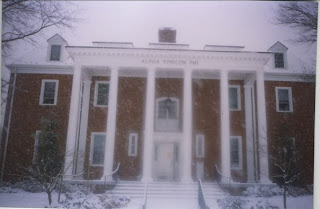 THE House
I had to climb up on the roof to detach the rope from its neck.
So
Since Karen was famous for wearing Hanes grandma underpants, I confiscated them and taped them to the walls throughout the House.
Later that night, after showering, I returned to my room to find the three life-sized bronze statues of giraffes (the AEPhi mascot) in my bed and my room toilet-papered.
The next morning, Karen went to class with her car decorated in tampons and condoms. 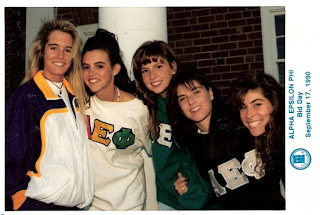 We found each other again...reunions can be so sweet. 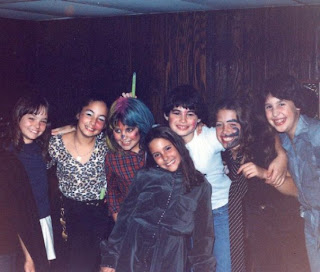 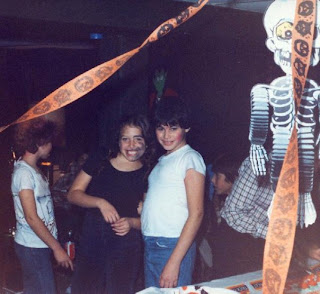 "The Doctor" rotfl
God am I having fun!
Posted by Unknown at 4:06 AM

could you have put a more hot and sexy picture of me?...
BTW I've lived that period dreaming of you and living my life writing love letters and drawing.. You have made a book of all the letters I've sent you.. One time you also made all the girls in the sorority write a letter to me so that time I received so many of them.. (I still have all of them)
I'm happy for you because since yesterday I've seen the happiness and the excitement in your face, and you where screaming everytime you were finding more friends.. Since yesterday the world is a little bit smaller for you and a little bit more crowded.. Thanks to the net.. I must say that I'm a little bit jealous because since I met you in 1989 I've dreamed to be able to have the wonderfull experience you've had in your life.. I'll have loved to be able to go to the University in the USA.. But I kind of live it thru you.. and that's more than enought..
ps. I actually sleept in your sorority house for few days and one morning while I was going to the bathroom I got caught in my underpants by a black lady that runned after me screaming and terrorised me, while I was trying to hide.. A nightmare!!

You know, Swiller posted his place of birth on his blog as Mununga, Zambia...after giving this some careful consideration, I may as well change my place of birth to Grosseto, Italy. After all that we have been through and what has happened the past year and a half...I am reborn. And it feels damn good.
Love,
Jodi

Sorry to interrupt the love letters... ;-) But welcome to Facebook! :) I'm soo glad you joined and KNEW you would love it. A bunch of my old high school and college friends have re-connected and, in a strange way, it makes me feel like my life is coming full circle. When you lose people for no reason at all and then re-connect as if there wasn't any time apart it is amazing.

Keep better in touch with me, sorority sister! :) "Many hearts, one purpose" still holds true for us, except that our purpose has changed with the addition of our children.

You're so funny! Thaaaaaaaaaaaanks! And I will be better with keeping in touch, especially since I've just found about 150 others I haven't spoken to in about a hundred years.
Hugs,
Jodi
Btw, I can feel that full circle thing.

Chuckling at your stories!

Facebook is absolutely great! I've made reunions with old college friends. It also helps me keep in touch with the current news, etc.

What a kick in the pants to hear from you!!!! Thank you for your kind post on Amelia's blog and as many times as I see the "sister's" poem, I always cry. Thanks for posting it here...I am copying it to Amelia's blog as I haven't posted it there yet...and they are beautiful words to share.

I haven't read over your whole story, but Marcie filled me in on little of it awhile ago.

Jordan is just incredible -- incredible how our kiddos have led the way to our new world. And Sophia is precious -- she definitely has your curls...but where'd she get the drama???? hmmm...

And hello to Luca. Haven't seen you since 12th grade in Pikesville. What a wonderful thing to know that high school sweethearts exist -- even if you didn't go to the same high school.

Thanks for reaching out and I look forward to keeping up with you.

C'mon Cutler! 8(ish) years of school together plus 4 yrs. of college and you can't spell my name???? :-) Great catching up with you! Glad you liked the pics. Maybe I can dig up a few more.