Sometimes life requires that you make certain decisions.
And your choices are limited between two possibilities.
To risk or not to risk.
Many times we are so torn between two agonizing decisions that we fail to see the third road.

There's the responsible, do-the-right-thing, please everyone around you and float on the calm sea choice;
then there's the deviate from the norm, follow your primordial instincts, sacrifice your values choice. 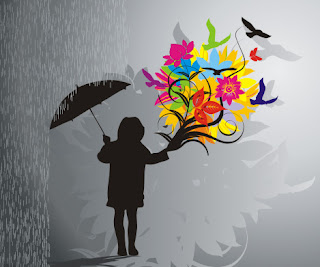 Perhaps in the end, road number three requires the most patience, the greatest determination and not only faith in love, but faith in yourself.
Road number three is freedom.
Freedom to unconditionally love, count the minutes in an hour as your own, not take a shower before going to bed, grow your leg hair til it curls and take your child out of school a half an hour early just to get a piece of pizza.

Road number three is despairing for five minutes of that hour, only to spend the remaining 55 walking around the Medieval town center with your daughter who swings the two new pretty pink books she bought entitled "Princess Sofia in the Silver Tower" and "Princess Sofia and the Snow Party", while sharing 6 flavors of gelato...in the rain.
Posted by Unknown at 3:58 PM No comments:

Today I saw a short eighty year old woman carrying her chunky 10 year old grandson's guitar on one shoulder and knapsack on the other, as he ate a chocolate bar and stayed out of the way of oncoming traffic.
I smiled at her.
She smiled back.
If it makes you happy, sister.
Italian grandmas are in much better shape than the American pale, fresh-from-the-beauty-salon-they-all-have-the-same-hairdo grandmas who get agitated when kids speak in restaurants. Maybe because the Italian women still ride their bikes at 90 years of age and prepare lasagna for lunch at 8 am. Whatever it is...it works.

I went to the beach alone this afternoon and found the sun beating on an empty beach. There was serious wind in Grosseto, but I risked and was rewarded. It's incredible how much thinking a person can do in 38 minutes. I took the time to unwind and re-focus.

My friend Shana posted this on her fb page:

You gain strength, courage, and confidence by every experience in which you really stop to look fear in the face. You must do the thing which you think you cannot do.
- Eleanor Roosevelt

I posted that on my Italian Cochlear Implant Forum, don't think they understood the comment in English, but I did.
And I just kind of thought it belonged there.

Thought a lot about that comment in my 38 minutes of being alone.
I thought about all of the walls I have had to break down.
But mostly, I thought of the current wall blocking me.
Me.

Posted by Unknown at 2:34 PM No comments:

The other day as I was driving and listening to the radio, the announcer asked the following question, "If you could have been any woman in history, who would you would you have been?"

Those were the two that immediately popped into my head.
Drama, intrigue, intelligence, manipulation, passion.
Those are the elements that I would have wanted to live.
My poor children:-)

So, here I am living the present.
Trying to re-invent myself on a daily basis.
The act of inventing and re-inventing requires establishing an equilibrium, patience and self-control.
I wonder if Mata and Cleo had doses of those qualities.
Posted by Unknown at 10:29 AM No comments: 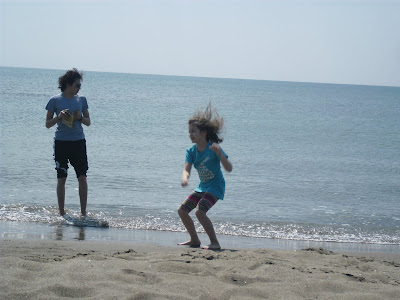 Some things are simple.
Sunday, I took Jordan and Sofia to eat some pizza at the beach. We got in the car, turned on the stereo and drove twelve minutes to the beach.
They didn't fight once.
Miraculous.
We had a really good lunch and walked the main street where we found to our surprise a little market. I told them they could each spend five euros and pick something out. Jordan bought five comic books for five euros, while Sofia found a porcelain fairy for 4 euros and a pack of stickers for 3 euros (she went slightly over budget and Jordan told her she owed me two euros). Then, we all got matching string bracelets- Jordan's has skulls, Sofia's has ladybugs and mine has butterflies interwoven in the string.
After we made our purchases we headed to the beach.
Sunshine!!!
I dropped and laid.
Sofia looked for seashells and Jordan read his comic books while walking in the freezing sea.
Jordan stopped reading for a second, smiled at me and said, "Listen to the shhhhhhhhhhhhhhhhhhhhccccccccchhhhhhhhhhhhhh of the wind and waves".

Life was so damn good.
And simple.
Posted by Unknown at 2:11 PM No comments:

Labels: on the beach in Tuscany on a Sunday

If the poor desperately try to feed themselves and the rich desperately seek to find their appetites, when we actually have what we need, do we realize it?

Can we be happy with enough?

The other day I walked into my court and looked around.

A year ago, I smiled to myself when I noticed three wooden posts knocked down, so that I could see straight through the green fields to the rolling Tuscan hills. I was ready to fly away and dive into those distant hills.

Yesterday, the three wooden posts were back in place, and strangely, I felt secure and safe standing within the fence and gazing to the hills beyond the fence.

Evolution is a work in progress.
Posted by Unknown at 1:02 PM No comments: 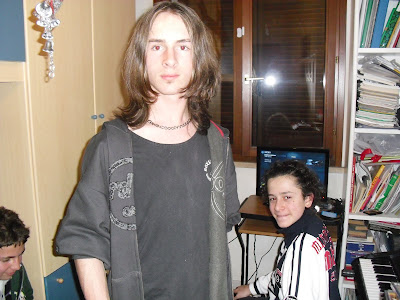 You know those periods where everytime your kids ask you something the answer is "NO!"
I found myself saying that dreaded word over and over again because of work. Because I have NO time, NO energy, NO desire.

I decided to get over myself and told Jordan he could have some friends over.
His face lit up and the messages started flying on facebook.

Last night they arrived armed with plastic rifles, guitars and an amplifier.
Girls in the first year of high school are interested in Senior guys. Jordan's friends are still playing war. Must be a boy thing.

At a certain point, I had to go to get the pizza for the party. Sofia was safe and secure at a neighbor's house. I told Jordan and his friends to be good for the 15 minutes I would be gone. One of his friends asked me for a lighter so he could turn on the gas and blow up the house. I smiled. And left.

On my way to going to get the pizza, I see Jordan crossing the street to go to a friend's house. I stop my car in the middle of the street, bawl him out and send him home. He calls five minutes later asking if he could go to his friend's house to get two games. I say, "Um, NO:-), DO NOT LEAVE YOUR FRIENDS ALONE IN MY HOUSE!"

I reach the pizzeria and Luca calls. He used to be a paratrooper in the Italian army and decided he wanted to start jumping from airplanes after twenty years. He's still alive.

I got the pizza and as I open my car door, the cell rings: "Mommy, I'm gonna throw up! I came home and Jordan's friends are playing the electric guitar, it's busting my ears!!"

I told Sofia to hide in the bedroom, I was coming.

When I arrived, they were all standing outside the gate with hunger in their eyes.
I unloaded the pizza, grabbed Sofia and we hid in my bedroom for the rest of the party. Every now and then, Jordan would come in my bedroom and say thank you Mom.

Sofia and I watched Willy Wonka and the Chocolate Factory. She fell asleep in her clothes because she was too embarrassed to wear her pyjamas in front of Jordan's friends. When everyone finally left- and I will say that high school students smell better than middle school students- Jordan came into my bedroom and hugged me.

Welcome to the land of Yes.
Posted by Unknown at 6:42 AM No comments: 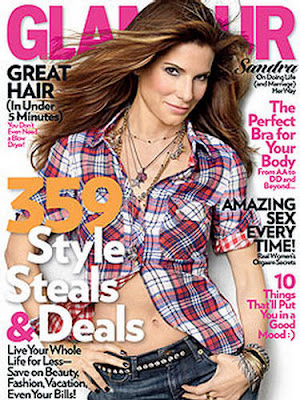 Glamour Magazine contacted me asking me for an interview for an article not related to Deaf or Cochlear Implants.
I responded to their email and said, "Ok."
I explained to them that I am not Glamour-ous.

They didn't believe me.
Then..
I started thinking.
I remember flipping through Glamour Magazine as a little girl and dreaming of becoming like those models all dressed up and beautiful. But not just beautiful, beautiful with something extra.

I have re-evaluated my concept of Glamour.

Glamour is not just the lipstick color of the moment....

So, I have found peace with the fact that I am part of an article in Glamour Magazine, and I took advantage of the occasion by requesting that they add information for parents of newly diagnosed children with hearing loss. (Crossing fingers that they do that- I believe the article will appear in the July issue)

After all, there HAS to be a reason they found me out of all the blogs on internet.
Posted by Unknown at 9:53 AM 5 comments: