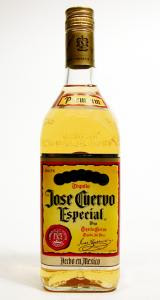 SLAMMING (how many bloggers are there on Deafread? And how heavy of drinkers are y'all? - Personally, I'm bombed after one and a half glasses of Prosecco - my tolerance has taken a major nosedive since College-rotfl...I think Paotie and Mac could handle a bottle each? Add Paula, Val, Sharon, Val the CI Gal-who could use a shot after a week of school, Geo, Amy, Mishka, Jamie Berke - who definitely could use a stiff shot right about now, Patti's good for half a bottle, Karen Mayes, Shit- the Young Dudes could use a big old bottle after that 6 part blog, The Editors seem like a rowdy bunch, Rachel doesn't drink, but I'm gonna have to include Melissa in this party, Aidan is DEAFINITELY IN (not screaming), ASL 98, Candy, White Ghost, KL, Jessica, Jenny, Christina, Jenn, KW, Karen Putz!!! Go, Go, Go...but the one who will do the most shots...will be...ABBIE!!!!) THE JOSE CUERVO GOLD ON THE TABLE!!!

*It's FRIDAY!!! Break out the lemons*

My comment to Patti when hell broke loose after my blog:
Patti,
I apologize since I obviously offended you and others, that wasn’t my intention. Nor was it my intention to apply my thoughts and actions with regard to raising my son to others. I have no deaf role models and there is no strong deaf community where I live, so this message that you are sending now can only help me now, it wasn’t there back then, when I began all of this. I can’t argue with anything you’ve said because I agree with everything…but I am not an audist, I’m just a hearing mom trying to do the best she can for her son, and who no doubt is making mistakes. I apologize that my blog made you so angry and offended you so deeply, it was not my intention.
Peace,
Jodi
Patti's response to me after my apology:

thank you for your fast reply

I know you are not an audist. This is why i did not call you one. The mentality that Deaf folks can’t / don’t / won’t function in the hearing world is an example of audism though.
I totally support and love and care for you and ur son, Jordan. I know you are doing what you see as best for him. I know you love your kids with all your heart and soul.
I in no way shape of form want to put u on defensive or make you feel bad about how you are raising him. I just wanna let you know that being Deaf in a hearing world is not bad except for when folks decide you are not functioning or your future is hopeless cuz u are different
that p.o.v. is as old as time. that p.o.v. is the DISABLING CONDITION that d/Deaf folks have to combat daily. I do not want u to be part of that p.ov. i dont want u to buy into that myth.
When a friend told my mom that her grandson was deaf - my mom replied “wonderful!”
true - biz. it is not cuz my mom is Deaf (she is not) it is not because she is an ASL user (she is not) it is not cuz she is a militant (she is not) - it is because she actually thinks it is GREAT to be Deaf cuz she sees that im fine and all my friends are fine
the mindset of “deaf folks can’t function in a hearing world” has inspired the oral/aural only movement
many people have worried endlessly about Deaf folks ability to function and ironically have always chosen to tie their very hands in their quest to help Deaf folks function when all Deaf folks have been asking for is to be viewed as HUMAN
feminist, african-americans, gays and lesbians… all of us have had this struggle
i apologize to you for responding so strongly above
the “functioning in a hearing world” is such an old and hurtful mindset that it set me off big time


*Take out some salt, Ladies and Gents*

This was the comment DogFood left on Mike McConnell's Blog "More Cochlear Implant Bloggers Needed on Deafread?" a couple of days ago, and I just can't get it out of my head:

Eh, i want to point out that i notice that there has been a lot of wonderful comments made between the recent postings of Rachel (of CI online) with the rest of the deafread community.
I think that we are simply black and white sometimes and can only meet together in the grey area if we choose. What I have learned in the last year of skimming the deafread community between the two extremities is that both of them have their own bad apples that make everything look bad for all of us. I also learned that so many people are willing to speak for the rest of us, when in actually one is just speaking for themselves.
what bugs me the most is that people keep referring to each other's rivals as "they" and "them". I challenge any blogger/vlogger to use the word "us".dog food | 03.05.08 - 4:02 pm | #

*salt that little spot between your forefinger and thumb (GEO AND ABBIE -- NO BODY SHOTS ALLOWED HERE - OR DEAFREAD WILL NOT ALLOW THIS TO BE POSTED! SORRY P-A-O-T-I-E!!!!!)*

Val's post made a strong point:
I want to share with you my experiences. I can't wait to explain the changes in my life, since my cochlear implants. Better I want to tell you about how wearing hearing aids as a child really helped. How I am having a difficult time learning ASL.
Oh well,Nevermind!

And Ann C's comment was thought-provoking:
I hated the word! Growing up in a hearing family in which conversations flew fast, I finally got into the habit of banging repeatedly on a table with the flat of my hand and an exasperated look on my face every time somebody said "Nevermind!"

Finally my father recognized the problem and would demand only one speaker at a time can "hold the floor", so that I could hear what was being said.

*raise your shot glasses filled to the top with TEQUILA in the air!*
Here's one of the many comments, Steak and Shake queen Karen Putz received:
I am Trish Marie said...
I'm a bit surprised that the manager whose actions are in question (well in more than question!) was not there to apologize to you. It is great that the execs have apologized. It is even more wonderful that this has forced them to examine their poilicies. But the point was to educate people, such as the manager, in what exactly discrimination is and, subsequently, make changes in the company policy. It seems like he would have apologized to you, as well.
I am very proud of you. I know that some people may react negatively toward you during this. But for all of those who themselves are deaf or, like me, are raising deaf children, it means the world. A huge thank you to you!

HERE'S TO US!
(and a word to the wise -speaking from experience-NEVER, EVER mix Guinness with Tequila *smile*)
HAVE A GREAT FRIDAY NIGHT!! FROM ITALY, WITH LOVE...Jo
Posted by Unknown at 2:27 PM

TGIF...Yah, I'm good for another shot. Cheers to Jodi and the gang!

Paotie just lost his bid to obtain the medal of honor. Cap'n Picard from the Star Trek just denied his request to save me! Duh!

Nice try, Paotie. Next time try to involve the Impossible Mission to save me.

Thanks for the shot, Jodi!

Whoo! I'll get right to SLAMING! Can I? THANK YOU, it made my day.

Jodi, For about a month, since I stumbled across your blog while surfing DeafRead, I've been hooked. You go, Girl!

I'm glad I wasn't invited - because I would DEAFINITELY have been a party pooper! ;)

*sits in the corner on a stool staring, politely denying shots, sipping wine coolers slowly over the course of the night*

I can easily pass out after a third bottle of wine cooler... :D

HAHA! I just woke up and read this and it started my morning off perfect LOL! That is the ultimate solution to the problem with US, we are all a few drinks behind.

Cheers! :) If you happen to come through Jersey on your trip here, look me up :)

Sorry babe, I like my tequila mixed in a frozen margarita in one of them fancy glasses. And add an umbrella, will ya? The last time I chugged and slammed was long before kids. :)

You get a shot glass of Irish Creme (Bailey's) and a glass/mug of Guinness. The contest consists of everybody dropping the shot glass into the Guinness, and then immediately chugging the whole thing down as fast as possible.

Of the group of mostly manly men and Paotie, a small, petite woman in her 50's won.

See, we are in the Powerpuff Girls! (Cartoon Network)

Can't believe ya'll started drinking without me!!!!! Just got back from Jenna's dance competition, so I need a whole bottle myself after a whole day with hundreds of dancers and loud music.....okay I'm ready...pass the bottle. Abbie, save some for me.

I may be late to the party, but I'll catch up quick. Thanks for the shot. I needed it.