I just put Sofia to sleep reading a book called, "La migliore del mondo è la mia Nonna" (My Grandma is the best in the World -yes, the mil gave it to her *smile*)and I'm in a very nostalgic mood, thinking about my own grandma. I kind of have one foot in and out of the door since I'll be leaving for Baltimore with Jordan in about four days. He's already begun the countdown, and I've started going out of my head preparing for the trip with a hundred other things to worry about before we actually get on the plane.

The most difficult part of moving to Grosseto eleven years ago was leaving my grandparents. Gram and Pop practically raised my sister and I during the nasty divorce years and were ALWAYS there for us. I looked forward to Friday nights because that was the night when Niki and I would sleep over Gram's house with the cousins, Jay and Andy. Yeah, it was penny poker night and the killer line-up on TV was Dukes of Hazzard (lived for Bo Duke-the only blonde I've ever loved), 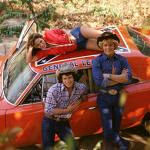 and after we got tucked in and had lights out, of course we all snuck back into the living room to see Fantasy Island.

Gram and Pop were always asleep and snoring by 10:15 pm, so we got in a full 45 minutes of adult TV and hide-and-go-seek in the dark.

Our all-time favorite memory of the Friday night sleepovers was the night Gram insisted that she didn't snore. Not only did she snore - she dragon-snored, and she and Pop would not only bicker during dinner, they carried the conversation into their dreams and would have snoring matches...Gram always won. So, to convince her that she did in fact, snore, we taped her. Andy, Jay, Niki and I brought the tape-recorder into their bedroom, I almost knocked Pop's dentures off the night-table, you can't even imagine the scene, must have been about twenty-eight years ago, I remember it like it was yesterday. We laughed so much, I don't know how they didn't wake up, although she snored so loud, I still can't understand how she didn't wake herself up. The next morning definitely required Depends and I don't think they had those back then, because we were all on the floor. She couldn't believe it was her snoring, and Pop was so excited after thirty years of living with dragon-lady that he now had proof. Amazing moment.

I still see Pop in his Hanes white boxers and big old belly hanging out eating a tub of Pantry Pride Cookies-n-Cream ice-cream with a spoon. He knocked back gallon tubs at a time. My Gram was the all-time worst cook - it's hereditary- but she could make some mean soup...every variety, chicken noodle soup, chicken corn, pea and my all-time favorite (I am from Maryland) crab soup.

Pop was the tunafish champ of the world, he put just about everything in his tuna - tomatoes, relish, cucumbers and it was always THE BEST!

Growing up, my grandma paid for my ballet, jazz and tap lessons.

She took me clothes shopping and played with my hair. Pop helped me get my first job at the Bagel Shoppe in the Owings Mills Mall at age 16 so that I could pay for car insurance. Every single Saturday morning he would come to visit and slip me a twenty dollar bill, every single Saturday. I would say, "No, Pop, it's okay, I work, I don't need any money." And, he would insist. After my sister totalled my car when I was in college, he gave me his so that I could go to work to pay for insurance and beer money. (*smile*) I used to have to stop on the beltway to add oil, it was a real piece, but it got me through college and every single time I talked to him on the phone he would ask, "Hey, Jo, didja check the oil?"

The worst thing I did before leaving Baltimore was kill my grandparents before they died.

My Pop died three years ago, the May ninth (my mom's birthday)after Jordan got his cochlear implant. All he ever wanted was to be able to communicate with Jordan, who could never speak English. It's amazing how universal the language of love can be and how it can break the sound barrier. Pop didn't let language issues stop him from communicating with Jordan and on our last trip together my 82 year old grandfather jumped into the swimming pool with his clothes on just to swim with Jordan and make him laugh...

And Gram? I was reading the Grandma book to Sofia and came across this:
Dear Gram, I love you for your hugs and kisses. You are sweet and dear. I love you, more than the world. I like when you snore during the night. I like that you are you.
The only problem is that my Gram is no longer my Gram because she has dementia and is living in a nursing home. There is no pain greater than living here and not being able to take care of my Gram who took care of me my entire life. She is living in a shitty environment with strangers taking care of her or neglecting her, depending on their moods. Emptiness. My mom is doing the best she can day in and out to visit her and make her life more comfortable, but she doesn't even recognize my mom who sees her every single day. Who knows if she'll recognize me after nine months that I haven't seen her? Will I even recognize her? Jordan hates the nursing home.

I know that Pop is watching over us, and I know that he is not happy about Gram.

As beautiful as it is to go home, it's just as painful. We all make choices during our lives, some easier than others, but we must always live with the consequences.
Posted by Unknown at 5:26 PM

How blessed you were to have such loving and caring grandparents. I am sure your Pop is so proud of you and your entire brood. Your Gram may not know your name or who you are, but rest assured that she DOES know that you love her.

What a great family, Jodi! And I love the snoring story, because it reminds me of my grandma. I hope your trip back is better than you could ever imagine.

I liked how you put it about choices we make in life...so true.

That was really sweet.

Your snoring story reminded me of the same thing we did to my Dad's snoring just to prove he snores! And we still have the tape.

We also used the tape recorder to communicate while I was at Clarke School. The teacher would help me understand what my parents had to say then I would make a tape for them. Later we used phone because I could talk/hear on the phone. It pays off!

And the TV shows, Wow exact same stuff we watched on Friday nights. That brought back memories.

I continue to enjoy your blogs. I keep coming back to look for more because they were always good. I am reading a Janet Evanovich book.... so FUNNY. Somewhat similar to your style.

Enjoy and have a safe trip!

My mom's grandmother had Alzhemier's disease for more than 10 years (its progress was SLOW... at the end we were impatient for her to die... awful I know, but there was nothing left of her in the body.) Before the disease, she was a retired professional painter, enjoyed going to the parties, entertaining at home, loved fashion.

Okay, Jodi, now I have tears...no matter how busy I am tomorrow, I'm going to stop in and see my Grandmother! Love ya

This was such a sweet post. I have very fond memories of both my grandmothers. I didn't know my grandfathers very well. I miss mine too.

Here's the thing-- one grandma visited me when she died. I'm talking about spiritual visitation. I didn't know she had died yet. She came to tell me how happy she was. I know she's in a better place now.

Thanks everyone for sharing such personal comments, some posts are more difficult than others. hugs, Jodi

Sweet...brought back wonderful memories of my grandma. How I miss her and recall watching the Ed Sullivan show every Sunday night with her. She'd have the volume up loud cuz she couldn't hear well enuff which was perfect for me..he he!! I was a single mother with 2 children living in DC when my grandmother had to be moved into a nursing home. She was senile...so said my relatives...I could not afford to visit her in NY and she lived there for 3 years and I was told she didn't know anyone anymore. Although I have mixed feelings about remembering her as she was...I wish I could have visited.

Jodi, as hard as it may be to see her the way she is now...I'm sure she knows it is you deep down somewhere in her heart.

Thanks for taking us down memory lane...and have a B L A S T in Baltimore. Eat those wonderful crab cakes for me and April is Oyster season...eat em for me too at the famous Lexington Market!! ahhhhhh, smacking my lips!!

HA! Divided, now you brought back an interesting memory! I was at a happy hour with my best friend Julie and her twin sister Jenny eating oysters by the fives, lived for oysters! Suddenly, I started itching and my ears started really feeling funny. I broke out in hives and they had to rush me to the hospital because I kind of stopped breathing. I was good to go after an iv of benedryl, but not destined to slurp another oyster...sniff. *smile* Jodi