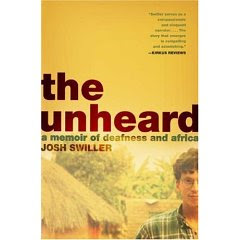 My friend just sent me this link to the New York Times article Cochlear Implant Supports an Author's Active Life and the interview was conducted BY PHONE!! Everyone knows I LOVE Josh Swiller, he is a role model for the hearing mother of a deaf son with a cochlear implant. And his writing...AMAZING! There is nothing hotter than a man who knows how to use his pen!

I'm still in the middle of reading THE UNHEARD A Memoir of Deafness and Africa only because I've had other issues with what is going on here in Grosseto...but I can't wait to finish reading. I've been underlining important parts as I read, and basically I've underlined the entire first part of the book. I need to share some of his book and beg everyone to read it, you will find yourself if you've ever worn hearing aids. Reading his words is like re-living my son's life...

Swiller writes:
...I waited for his questions, mentally preparing the speech I had written for just such an occasion: These are hearing aids. They take all the sounds of the world and turn them up louder. I can't hear without them, not a thing. You will need to talk loudly and face me when you talk, and I'll still miss some things, but I'll make up for it. (pg.20)
How many times did I give this little speech to Jordan's friends or new kids who met him while playing on the playground? Until...the day that Jordan began to use his own words and voice to say the same thing.

He also describes the hearing aid experience very eloquently, at least what I saw Jordan living with his aids:
"All that noise is difficult to decipher, so hearing is not quite the right word for what hearing aids bring forth. Amplified 90 decibels, voices aren't saying words so much as the idea of words. With lipreading and guesswork, your brain has to turn the ideas into words - and while I did fine in quiet places, in noisy surroundings I was lucky to get a tenth of what was said."(pg.23)

What always amazed me about Jordan was that he was able to comprehend conversations based just on a few words, his intelligence compensated for his lack of hearing with the aids. The one major problem was that while he could understand the messages, he was unable to express his thoughts...leading to major frustration and temper tantrums. Maybe he would have arrived to the point Josh Swiller reached - "I learned to adjust, think on my feet, forget what I couldn't do, and focus on what I could."(pg.27)

However, my fear as a concerned mother observing her suffering child, was that he wouldn't and he would just close further and further into himself in anger and frustration.

And then there was the cochlear implant.

The NYT article states, "Some deaf people are opposed to cochlear implants, because they regard the world of the deaf as a community, which they believe that implants threaten." Hmmm. Can't argue 'bout that comment.

Swiller comments, “My hearing is so many light-years better than I ever could have imagined — it’s a miracle. Before the implant, I couldn’t talk on the phone, I couldn’t have a conversation. It was very frustrating to be in the world and not in the world, watching people talking and not being able to follow what they were saying.”

*The cochlear implant has radically changed this for Jordan, as well.*

Then, Swiller drops the bomb and says,
“A small child with severe hearing loss should be implanted as soon as possible. Sign language can be learned down the road, but not English. It’s a no-brainer to me if you want the child to succeed in a hearing world.”

BTW, I just picked up my very little purple dress...so if you feel the earth shake tonight...don't be alarmed *smile*
Posted by Unknown at 7:13 AM

Will you object if a hearing parent refuses to implant their "small child with severe hearing loss"? What if it is a Deaf parent? Do you consider it as a case of negligence?
I don't mean to set fire, but I am curious to see what you would say to this.
If I have Deaf babies (by birth or adoption), I won't implant them. I will give them hearing aids, speech therapy, 100% ASL at home, and two loving Deaf parents-- and hope that by then people will forget about the CI debate and won't judge people if they opt to NOT implant.

While it may seem from my blog that I completely disagree with you, I don't. I know that there are so many different ways to grow up and experience the world and I don't have anything against that. What bothers me is when one tries championing one way over another.

Anyway, I've enjoyed reading your work and look forward to seeing more from you. I especially love how involved you are in your son's life. He's lucky.

interesting post; thank you for bringing this out in the open. I'll like to read his book someday soon.

I also find it fascinating as how you constantly believe that hear=success but i can understand where you're coming from.

What i liked the most about this post is not the fact that the author advocates an opinion that kids must be implanted, but moreso the fact that he as an adult got implanted and learned how to use his implants.

This is how i see myself; a culturally Deaf man with a desire to improve his hearing assets for the rest of the world does not want to learn our language. While it is true that children pick up more as babies, I disagree in what the post was saying that English can only be learned when you're young and through spoken language; i learned through ASL and was the valedictorian of my high school.

I'm currently being evaluated for implants and look forward to seeing what is different when being an implantee. as of now, i face what the author faced and vehemently looking for ways to thrive better in a more mainstreamed lifestyle.

Keep up that great post and i look forward to hearing you talk about a Mr. Mysterious who waits to find you and your charms.

See my first comment. And, oh, do read Julie's piece, too.

I already read the book... excellent, I learned a lot about mapping, etc. I had no idea how complicated mapping was.

After reading more about CIs, I agree that implanting deaf children should be done at the youngest age, while the brain is developing.

Hiya gnarlydorkette, nice mug! I would NEVER tell another parent how to raise his/her deaf child. I am not a CI shove-it-down-your-throat advocate, I am just sharing our personal experience with anyone willing to listen. However, I will say there is NO comparison between hearing aids and cochlear implants, so if you choose to raise your child with the oral approach from birth, give your child the best opportunity to maximize that approach. Based on OUR experience and many others, that would be the cochlear implant. Is it negligence if the parent chooses to only use the hearing aids? No. Choosing the ci is a VERY difficult decision, but worth the year-long depression I went through after the operation, because my son has a totally new life. Thank you for your comment, Jodi

Dear Dogfood *smile*...uh, that mysterious man would be my husband, who is quite a mystery because I never blog about him...some things must remain strictly mine, at least until I change my mind.
Hear does not equal success for me at all. Cochlear implants equal hearing successfully, if that makes more sense...thank you for continuing to read and comment, Jodi

Abbie,
You've been quite busy on this blog today, I think I'll dedicate you songs more ofter you hot thing. Sending you hugs from Italy, you rock! You would die if you could see this dress! I can't even believe I have the balls to wear it..oh yeah, I don't have balls! Sometimes even a strong girl has to be a WOman!! hahahahaJodi

Hey Karen,
How cool was this part?? (pg 50)
"We passed the whole day sitting at the station, waiting for the bus, eating roasted corn and fending off child beggars - not so difficult, except for the deformed ones. I had no defense against the boy whose left leg was swollen up like a parade float. As he circled us, it galumphed after him like a pet tree. I gave him half of my travel money.

"You're just going to encourage him," said Chris. "He'll just keep doing it. Won't get it fixed."

JS rocks. I laughed out loud at that one...my husband was like *wtf* Jodi

My bad... I confused Josh with Michael Chorost... whom my brother knows personally... not Josh.