Born Deaf for a Reason 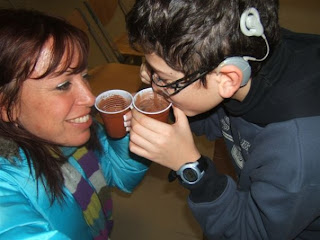 One week after Jordan was diagnosed as being profoundly Deaf, I dreamt of him asking me for three pieces of pizza. I never doubted he would speak. I just never imagined that thirteen years later he would speak to the mother of a newly diagnosed Deaf child.

During the holiday pep talk I had with my friend the other day, she asked me the question, "Does Jordan really understand the type of work you do? I mean, does he realize that everything you try to accomplish through writing, blogging, and offering support is a direct result of him?" I told her that I've explained to him how much he has taught me and how much he has enriched my life, how much I love him and how many parents there are out there who know his story..but I also said I didn't think he really understood exactly the type of work I'm trying to do.

I took him to Pisa today to participate in a study on multi-modal integration- how the brain is able to process both visual and auditory messages per request of my ci surgeon. I asked the speech therapist to organize a meeting with a parent of a deaf baby because I was bringing Jordan.

I met with a mom and her absolutely adorable eighteen month old baby. She asked ME a million questions and Jordan answered all of them. I never opened my mouth. She said, "Was it really hard in elementary school, did your friends make fun of you because you wore hearing aids?" He said, "Yes, they made fun of me. It wasn't easy. But I always played sports like swimming, basketball and baseball. And I went right from pre-school to third grade." I was like "WHAT?" First of all, I said, "You never skipped first and second grade- you must have blocked them out- they weren't the easiest of years and you were a temper-tantrum throwing fighter who always got along with your friends except for a couple." He was a champion...and the mom was really, really happy to talk to him. 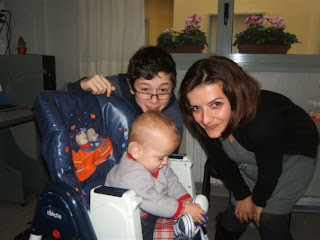 I sat back and observed my thirteen year old son talk about his life, the fact that he must choose a high school next year, his psp, mp3 and his crazy sister. He told this mom his life story. As we were getting off the train earlier, I said to him, "Jordan, it's possible you may have to speak to a mom when we get there, try not to be timid." He replied, "I'm only shy in front of women." ROTFL.

He was not shy.

That was the first incredible moment of the day...Jordan helping a mom and a younger baby.

The second amazing moment was hanging out with Michele, an older Deaf man, someone for Jordan to identify with. Loved that. Jordan once again told his life story and they talked high school, cis (they both said that when they put on the ci first thing in the morning it's like electric shock to the system-silence to sound-and that it takes ten minutes to handle the world...they also compared stories of people staring at their cis to the point where they say, "Do you want me to explain to you what's on my ear?") and women. Michele's mom and I were the moms watching our "kids" and loving it. 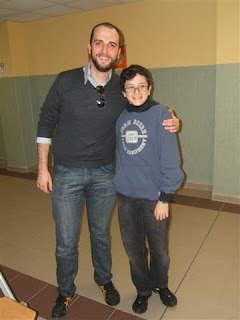 His mom gave me an angel charm for my cell phone that I will NEVER take off. 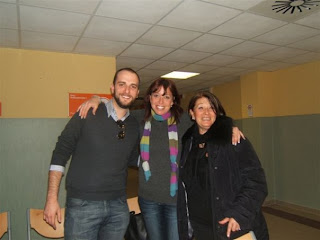 Jordan is a special child and I am so blessed to be his mother. He shares himself with others, and even at 13 years old he is conscious that he has overcome difficulties...that he still encounters frustrations on a daily basis...but most importantly...he talks about all of that with others.

I have a hearing Deaf child who listens to what others silently request of him.
Posted by Unknown at 4:33 PM

this is an amazing post. what a great kid you are raising!!!

Not terribly shocking that you have an incredible kid -- he comes from incredible stock!!!! Sounds like a well spent day. Everyone learned something and took away a special experience.

"I have a hearing Deaf child who listens to what others silently request of him." - Wow. You make my day. Thank you so much for such an amazing post, especially during this time of the year.

Our son is 7 months and has a severe hearing loss. He's been aided 2 months ago. We are struggling but Jordan's story make us believe that we are capable of raising a self-confident, communicative kid. Thank you so much for being such an inspiration.

Julie...he will be okay. I promise you he will be okay if you love him, protect him, teach him right from wrong and insist that he learn his manners even when he throws the most horrifying temper tantrum imaginable to not do as you say. Be his example and when you can't be that perfect example, let him know that you aren't perfect. Those moments form the backbone of the journey you are about to take.
xoxo

Can't wait for Lotte to get that kind of sense of her deafness and hearing.
Seeing her help others who wonder about it all must be a tremendous experience..
btw.. She has no problems putting on her CI's in the morning. No blinking, nothing. Just puts them on and is up and going.. Actually, she's "up and going" before she even put's the CI on..
Perhaps Jordan likes the movie "Equilibrium"
http://lotte-sofie.blogspot.com/2007/03/ci-in-trhe-morning.html

That is an amazing story. Sounds like a wonderful kid and it must have been so reassuring for that mother to talk to him.