This was Sofia Madyson 7 years ago. Today she learned how to ride a bike and knocked out an old woman who should have been watching where she was going. Seven years ago I was in agony screaming for her to come out (no epidurals in this town), and when she finally, finally did- I watched fireworks from my hospital room together with three other new moms and their babies. I held my baby girl in my arms and wished for her to be strong, intelligent, honest, hard-working, affectionate and hearing.

At that time, Jordan was angry, frustrated and never hugged or kissed anyone. I wanted Sofia to take that pressure off of him so that the family would have someone capable of showing the love to them that they so desperately wanted to receive from Jordan.

Sofia's job in life was to give love, I never told her that, but she does just that every single day of her life. And now...so does Jordan.

2009 was an explosive year. I predict the atomic bomb here in 2010.
My New Year's Resolutions are:

Thank you so much for the love and support you have given me all throughout 2009, I'll probably need twice as much in 2010. 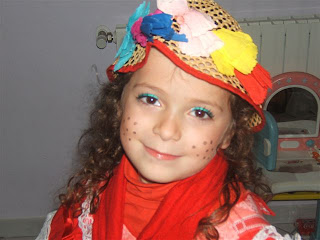 HAPPY NEW YEAR, JADOO!.....AND HAPPY BIRTHDAY SOFIA....what a joy you are - soooooooo beautiful and funny and special! Nunno loves you, misses you and thinks about you EVERY DAY....especially TODAY! LuvUnunno

"Sofia's job in life was to give love, I never told her that, but she does just that every single day of her life. And now...so does Jordan."
I loved this paragraph - so true and so awesome! Dad

Very touching post.Thanks for posting.
have a wonderful Christmas and new year.

You thank everyone for their love and support, yet it is you who constanly gives that love, support and understanding. So you deserve it tenfold and in 2010 you will have it and whatever else you need. So from the land down under: Happy New Year and lets hope 2010 brings us all peace, happiness and lots of laughter. :) Jo xx

Although I have not commented much...but, I've kept tabs on your blog among the other great blogs in DV. Just wanted to say HNY and that you've come a long way...as did most of us, I'd surmise. Happy Birthday Sofia! and Happy New Year!

Credit for your excellent entry.