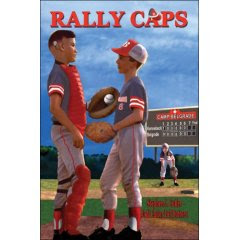 My dad is just as big of a pain in the ass as I am, so when he gets an idea in his head, he tries just about everything to reach that final destination. Although, this little idea was kind of cute, especially because Jordan's in the video. Thanks to the magic of computer graphics, Jordan's processor, which is normally on the left ear, was abracadabrad to the right ear. *Because* the character in the book has the processor on the right ear and my dad is a stickler for details. First of all here's the video...Please note that before Obama gave his speech, Curtis Pride (The new Head Baseball Coach of Gallaudet-Congratulations, Curtis!!!)stated: "Nothing is Impossible!" - I totally believe him:


Second of all, here's the letter, minus a chunk, that he sent to the official RALLY CAPS mailing list:

Thank you again for your continued interest and support of RALLY CAPS. It has been an exciting ride....far beyond our wildest dreams. It started with publication in the USA on April 16, 2007 (after 25 rejections!) and then exactly a year later on 4/16/08 RALLY CAPS was translated and published in Italy. We received endorsements from Cal Ripken, Jr, Brooks Robinson, Curtis Pride, and Tim Kurkjian. In July 2007, I traveled to the Baseball Hall of Fame Museum for a book signing and had VIP seats for Cal's induction ceremony - the experience was one of the biggest thrills of my life. ReaderViews honored RALLY CAPS with the 2007-8 Reviewer's Choice Award for the Best Children's 7 and Over Book.

The RALLY CAPS website continues to receive over 400 hits a month. That brings you up-to-date and our announcement of the next exciting event for RALLY CAPS. We have taken our inspiring story a step further and developed a "Movie Trailer PreView." We are hoping that someone will see our 3 minute video and present us with a deal to make RALLY CAPS into a feature film or "Made-for-TV" movie. Networking is what it's all about, so if you know of a literary agent, film producer or representative of a movie company, anyone who you think might be interested....please pass on our short "PreView Video" of RALLY CAPS and my information below. Remember "Dream It, Believe It, Work It, Achieve It!" We've come this far, who knows what's in store next!?

The "PreView Video" couldn't have been possible without the unbelievable efforts of our producer, Chris Hatcher, of ReaderViews and also the contribution from Jason Siemer, www.jasonsiemerproductions.com. Jason permitted us to use his terrific song, "A World of Orioles Baseball."

Thanks again for your help and support! Enjoy your RALLY CAPS "PreView" Video!

Best Wishes for a Happy Holiday Season and a Successful and Healthy '09!

Stephen
Posted by Unknown at 7:16 AM

Wow, I liked the video! I heard soo much good thing about Rally Caps so I plan on buying one soon.

I grew up playing baseball, I must tell you what happened when I was 7, that time we were in CT and I told my mom that I really want to play baseball after seeing my brother on the field.

So, she signed me up but then I was rejected simply because they said I'm deaf and I shouldn't play at all. My mom got so frustrated trying to find any coach that would want me to play. She had to break the news to me that I can't play, I cried all day.

I can never forget that. But good thing, we moved to Florida the year after and I joined baseball with almost no problem.

That's why I believe every kid should have the opportunity to play whether if you are deaf, CI, oral, blah blah.

Me again....btw, the "chunk" that you left off of my email to the RALLY CAPS contact list was "all about you!" Maribeth knows what I wrote....dad

Hi Geo!
Sorry it took so long to get back to ya...thanks for your comment and I hate hearing about stories like this-but they keep us real and we learn. I'm glad you played at the end...love baseball. Hugs, Me
Ok, Dad:)
Thanks Dani...for everything.