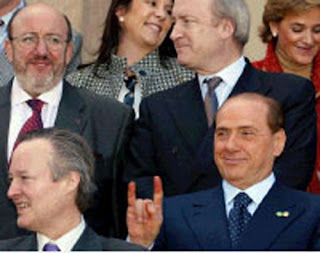 *WTF??*
As an American Mom in Tuscany, I would like to officially state that I am profoundly humiliated, mortified and really pissed off by Italian Prime Minister Silvio Berlusconi's lame-ass comment to Russia's President...who then proceeded to laugh at the "off-color" joke.

Umm.
Berlusconi's an idiot. A very rich idiot. But wealth doesn't give you an excuse or permission to be an idiot.

Here is this spectacular moment in Italian Diplomacy:

In Italian we say, "Non capisce un cazzo."
In English, I would like to request that the USA not use force to retaliate...we're kind of in direct proximity to Rome.
Unfreakingbelievable...
Posted by Unknown at 2:54 PM

I guess Prime Minister Perlusconi is jealous of Obama's Spartan figure. He was silly and playfully wrestling with his pal, President Bush, at a tuxedo dinner at the White House recently.

Silly is a good adjective. Ridiculous...may be better. BUT, he is certainly more interesting than Prodi.

It has just occurred to mind that Florence's first duke was black and was the son of a pope and a North African slave. Florence was culturally well-balanced and tolerable towards diversity. The pope was a relative of Catherine di Medici.

I do not know why I was very like to play the EVE, so I need eve isk and the eve gold , do you know the eve online isk.