On our way to dropping off the kidlings at the in-laws last night, I said, "Brrrrr, I'm freezing."
Jordan responded, "All girls are always cold. It's the man's job to warm them up."
Jaw dropping, I said, "What????"
Jordan said, "Alessia is always cold and she asks me to hug her to warm her up."
(hobag)Between me, myself and my forever frozen hands and feet, I think, there are certain fundamental truths in this world concerning men and women. Interesting that my twelve year old son is starting to "get" them.

After dropping the kids off, Luca and I headed to the movies to see Seven Pounds with Will Smith. I've loved Will Smith in dramatic films since I saw him in "Six Degrees of Separation" many years ago. Okay, let's put it this way, I would become bisexual for Rosario Dawson, without even thinking twice. How freaking hot is she?? The movie was interesting, sappy, etc. and my eyes started flooding when he killed himself to give her and the rest of the world his organs. However, I have to say they lost me when she went to find his eyes...and they were in Woody Harrelson's head. Creepy. But I was so into my cry that I could have almost stomached that, had the movie theater not flashed on the blinding lights in the theater the exact second the movie ended.

Can't a woman enjoy a good cry without being busted?? I had to wipe the tears, not a kleenex in sight and then, everyone in the theater started looking around to see who was crying or red-eyed. I like to cry in private. Would it have been so damn difficult to leave the lights out at least until the end of the credits!?!! Not only did it ruin my cathartic experience, but then I got totally creeped out about the eyeball thing. Would you go searching for your dead lover's eyeballs had he donated them??? Don't think I could handle that...and there is something so wrong about Woody having Will's eyes. Wonder what Jada thought about that. In any case, Rosario is hot.

So, this morning the mil invited us to lunch, actually it was Sofia who called to invite us since she is telephone obsessed. My mil had made lasagna, we accepted. During the meal, as we were sitting and savoring the lasagna, Sofia picked up the two liter bottle of coke and began drinking out of the bottle. Oh no, no, no. I yelled at her and called her a truck-driver (if you are a truck-driver who does not drink out of the bottle- I apologize). I told her that was not princess behavior. She said, "Mom, you are a piece of shit!"

My sweet, adorable six year old lipstick-loving princess called me a piece of shit. I told her to say she was sorry. She said no. I said she would be grounded and thrown in her bedroom for the day. She said no. I said there was no way she was going to see "The Beverly Hills Chihuahua Movie" this afternoon. She started bawling hysterically. My mil said she didn't mean it, I said, she'll apologize. Sofia cried on. Luca laughed. I kept my poker bitch face. My mil took Sofia into the hall to have a little heart to heart. They came back after apparently they had reached an agreement. Sofia, blobbering and slobbering couldn't say that word. My mil said, "Come on Sofia, say you're sorry then Mamma will say she's sorry."

Does Sofia apologize at this point?

Nope. She proceeds to say, "You are a stupid piece of shit," She then gives me the finger and says, "Take that!"

I can assure you it took everything I had to keep a straight face. I looked at her and said, "You will say you are sorry."

Finally, after another half an hour of crying, stomping and seeing that I wasn't budging, she came and apologized. We hugged and kissed and made peace.

How did I get such a stubborn child with such a trash-mouth???? 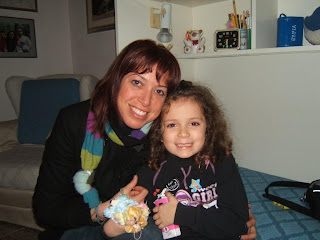 Jo....If you had opened a mouth like that to me you NOT ONLY would have apologized BUT ALSO been grounded and would NOT have seen that movie. You would have spent the day in your room with your dolls. AND BTW you NEVER ever opened a mouth like that to me or your mom....what's up with that mouth. It deserves to be washed out with soap....how does such a cutie-pie have such a foul mouth to her mother? I can see how you almost didn't keep a straight face; it is kinda comical. AND WHILE I'M AT IT - STOP SMOKING! Dad

Second, I wholeheartedly agree with your father, stop smoking! It just isn't cool. ;-)

Sophia is exhibiting the behaviors of my teenage daughter who has told me to shut up, etc. as of late. I'm reading a book that's telling me it's all normal... for TEENS.

Oh God,
Sorry!!!!! We usually get movies six months after they come out in the States, I figured everyone had already seen it...whoops!
The problem is that she is around Jordan's friends so her language is um, a little more inappropriate than the average six year old..
Okay, DAD!
Love,
Jodi
PS. Paula, could I get a title on that book??? *smile*

SPOILER ALERT..Marley and Me...the dog dies in the end!!! (lol). Believe it or not I read the book...it's better than the movie. OUR BOOK WOULD MAKE A BETTER FILM!!!
Grand Torino....I won't tell you how it ends.....but it's a good movie! Clint Eastwood is great!
Thank you Paula for your support....I had a by-pass and Jodi still smokes....what's up with that? Dad
PS: Jodi - Dave Fox had a stint put in yesterday - he had 99% blockage in one of his arteries. It could be you if you keep smoking. So don't "Ok, DAD" me - just STOP! Right, Luca????

Hi dad, I'm with you and Paula.. Luca

Peer pressure, it can be a good thing! LOL

I just quit for the upteenth time not too long ago. They're right, Jodi. :)

This time, I hope to make it.

Yes, I'm back home for awhile.

Check out this image, in particular the object that is on the right side of the image - http://health.idahostatesman.com/storyImages/1024-ih-addiction-700.jpg

first, the fact that your dad is saying (lol) is killing me!! lol. And I did put soap in Gage's mouth when he was about five, I only had to do it once. He hasn't said a bad word since...he's instead spray painted sh** on the doghouse, wrote it w/magnetic letters on the fridge and then sprayed it w/the waterhose on the hot sidewalk plain as day when he was supposed to be watering my flowers. In other words, I'm no good for advice here, Brook was shooting birds at age three to the preschool teachers...let me know what works.
I assure you, there would have been no movie though.

that is why soap on tap is the best thing ever invented...stick out your tongue and one quick squirt of soap!!! Both of my two have had a close encounter with the soap, only once, that was all that was needed. Now at 16 and 15, the conversation becomes, if you choose to speak like that with your friends that is your call, however I do not wish to hear that language around me - got it??? That usually results in a mumbled apology of sorts and promises not to do it again, which last until the next time lol.

Oh and re the smoking, I'm with the others bad, bad bad!

The book is called, "Get Out of My Life but first could you drive me and Cheryl to the Mall? A Parent's Guide to the New Teenager." It's definitely opening up my eyes to my teen! The copy I have is old though and Amazon has revised and updated versions in print and audiobook formats. It's inexpensive at $11.20 plus shipping.

BTW, what number girlfriend is Jordan on? Julie has her first!

Your dad's had a bypass and you're still smoking?

I quit smoking the day my sister, who was 30 at the time, was diagnosed with a malignant tumor on her throat. She survived the surgery and subsequent treatment.

She was never a smoker.

Think about the example you're setting for your kids. It's like saying, "It's ok to smoke, but it's not okay to swear."

Which is the killer? Smoking or swearing?

WOW. That was an intense read. I heard about that movie -7 pounds too at the John Edward Show - the medium .
Anyway what a rough go with Sofia. Each new stage of life w/ kids is challenging to say the least. (not to mention everyone's "yelling" at you to quit)
I think its 100% different the swearing and smoking thing. My 2 cents- its hard to reprimand your kids (personally speaking) when my MIL or my mom jump in . :(
debbie

Paula,
Now that is a perfect title for a teen book. Jordan has had halfers, don't think we can count Alessia as a full one...I'll keep ya posted. Good luck to you *smile*
Hugs...

Thank you everyone for supporting me about Jodi quitting smoking....maybe if all her readers put the pressure on her, she will FINALLY SEE THE LIGHT. We love you Jodi.........get it! Now stop before you are really sorry. It's unhealthy, smells your clothes and your house and is a bad example for your kids. Sofia, Jordan and Luca want you to stop...isn't that enough? Please write in and tell Jodi about your personal situation (like my by-pass and Anonymous' sister) and maybe it'll get her to SEE THE LIGHT! Thanks again everyone! Dad

Jodi this is the funniest thing I have ever read - sent it to my friend w/ a 3 year old with the same mouth. Hope everything is going well!

OMG I am peeing my pants! I shouldn't laugh, I have a mini me too with a mouth that needs some soap! She's our princess of the house though!

I smoked and quit for each pregnancy. After Aiden though I quit completely. I decided I would only smoke when I drank, so now I drink everyday! haha! I really did quit (smoking that is ... this woman needs her wine!), so I know how hard it can be.

Good luck with your princess!