In response to my post on Aidan Mack's new film,I Sign and I Live, ASL Risen asked me: How can we cure the Deaf community virtue??? Can you tell me that? Thanks.

Obviously, we may immediately throw out number 7. 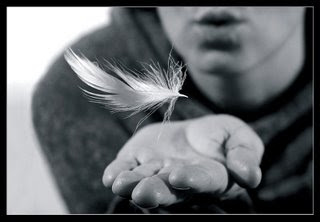 This leaves us with morality, valor, merit and potency. Each individual possesses certain virtues based on their life experiences. But the main source behind those virtues lies in the integrity of an individual, a combination of brain, soul and heart.

The Deaf Community has many virtues and a great deal of passion. However, there is a great deal of fear and uncertaintly as to its future. See the recent posts on Deaf School closings and budget cuts.

I prefer to speak of integrity.

Integrity defines the perceived consistency of actions, values, methods, measures and principles. A value system's abstraction depth and range of applicable interaction are also significant factors in determining integrity due to their congruence with empirical observation. A value system may evolve over time while retaining integrity if those who espouse the values account for and resolve inconsistencies.

Integrity may be seen as the quality of having a sense of honesty and truthfulness in regard to the motivations for one's actions. The term hypocrisy is used in contrast to integrity for asserting that one part of a value system is demonstrably at odds with another, and to demand that the parties holding apparently conflicting values account for the discrepancy or change their beliefs to improve internal consistency.

How you live your Deafness is your personal choice. How my son began living his deafness was my choice, however he still has the possibility to make his own choices as he grows. We went to the newsstand the other day, every Thursday he goes to get a Mickey Mouse comic, however yesterday he stepped up to the counter and asked for a copy of the local newspaper The Tirreno. I swear I almost passed out on the spot. I said, "Jordan, you do realize that you just asked for a newspaper, don't you?"
He looked at me, straightened his shoulders and said, "Yeah, I want to know what's happening in the world." I paid. (I've been laughing ever since)

Everyday we make choices. Above all, we choose HOW we want to live our lives.
Virtues are fundamental in living a quality life and in developing, appreciating and giving value to a sense of community.
I don't feel that the Deaf Community Virtue needs to be "cured" (just like I don't feel like I've attempted to "fix" my son's deafness), because the community is based on integrity. Based on what I've read and how posts have evolved with regard to the acceptance of cochlear implants as a valid approach to deafness, I think the Deaf community is in this phase: A value system may evolve over time while retaining integrity if those who espouse the values account for and resolve inconsistencies...

Sometimes we run across words in the Deaf community and use them differently or attach a meaning that is different than what others are used to.

Ask ASLisRisen what is the meaning of her use of "virtue". I'm guessing she means "value" as in "how can we restore the value of the Deaf community?"

Well, we are all different opinions on the virtue within the community.

Generally, there is no cure within the community because we have lived with the diverse community in which we believe in.

For instance, take a look at republicans and democrats....they have argued what they believe in.

You know the world is not perfect as we expected. It's about the moral values we believe in.....

Value of Deaf community and Deaf education. yes, that is what I mean... I have long time to concern that we are living in diverse community.

Anyway, nice blog you have but I still do NOT get waht you mean about integrity.. Possible I would borrow someone else blog that do have video comment access to explain to you from what I had seen going on here on this earth along different diverse community from some not all with lack of education.
As individual you live in your own different education life depends on your family's economy...

Thank you all for your comments. Now, ASL Risen, I understand more of what you are saying and I agree with your issue with education. I saw your video - the one you told me to click on the last post, unfortunately I do not know ASL and there was no transcript, so I couldn't understand it. If you would like me to add a video to the end of this post- I would be happy to do so, but it would have to have an embed code...
I appreciate your comment- I don't think I understood your original comment.
Have a great weekend,
Jodi

Your son is the main source behind those virtues lies in the integrity of an individual, a combination of brain, soul and heart.

Let's hear what he has to say when he is 21 years old.

These are the people that we need to hear from more than those that never experienced being deaf.

We need to stop listening to most of those "paper-smart", the so-called Deaf experts telling people how much they know and should have faith of their philosophy when they never experienced Deaf reality.

I am always shocked to hear others comments on parenting -- be it deaf, CP, autism, blind, etc. If you tell a parent of a typically developing kid (I speak as a Mom raising a little girl with global developmental delays, CP, hypotonia, g-tube fed, suctioning, non-ambulatory, non-verbal, upcoming strabismus surgery, tubes in both ears)what they've done wrong -- you will not hear the end of it. They will say (maybe not to your face) "HOW DARE YOU". Why is it with such complicated lives and decisions -- with no "Guide to Your Special Needs Kid" do people feel even more entitled to give their two cents regarding their judgement of how to raise your child?!?

I am not part of the deaf community, but have learned a lot from Amelia's service coordinator who works for Clark School here in NYC, one of the big CI schools and through my friendship with you,Jodi. I have sat on the sidelines and watched the back and forth "To CI, or not to CI" and it makes my head spin.

Chocolate and Vanilla people...whatever works for you.

For centuries, parents have strived for one thing: to "do right" by their kids -- and no one has a right to question that unless it puts that child in danger, physically or emotionally. That my friends, is a parents' virtue.

John...ok, but there's no need to wait until he's 21, he can write and speak for himself now...in Italian- little bit of English- working on that...
Thank you for your comment,
Jodi

I would argue we don't live in a diverse community, but more a divided one, simply because there are different sectors of deaf people, doesn't automatically mean there is a 'community', or common goal, that's the issue really.

One reads the term 'community' bandied about quite often, but then it is either a deaf one or a Deaf one. Diversity suggests regardless we all work together, this again is far from the case.

I have no idea who they mean, it depends who is stating it. It is all suggesting a common ideal, but it is theory, not practice as yet, I'm still unsure it is a want with some. We can all plead we accept everyone else, the real test, is putting everyone in the same room and then seeing if it is true...

MM-
Depends on where the room is, who's in the room and whether or not there's an open bar...be a little more optimistic:)Jodi

I'm with Debbie, you can read such uneductaed input and ignorantly biased comments on various disabilites and on other people's children. Few if any walk in our shoes, yet are all self-proclaimed 'experts'.

We've read at deaf.read those who are not even deaf and still tell parents how they should decide on what's best for their children, including those with no children at all.

My son is autistic, I am deaf so is Mum, why on earth would I give one second listening to these people on how to do the best for my child ? We think first and foremost for our children, whilst their thought is governed by own dissapointemt, bias, personal angst, and misplaced dogmas.

I am not using my child as a pawn in these silly debates. I'd have no hesitation saying butt out. Maybe that is a deaf 'virtue' we need to adopt a lot more, and for others to cease these continual digs at good parents, often under extreme pressures, doing the very best they are able for their children.

I am not using my child as a pawn in these silly debates. I'd have no hesitation saying butt out. Maybe that is a deaf 'virtue' we need to adopt a lot more, and for others to cease these continual digs at good parents, often under extreme pressures, doing the very best they are able for their children.
...Amen.

I found this site using [url=http://google.com]google.com[/url] And i want to thank you for your work. You have done really very good site. Great work, great site! Thank you!


Mansour Engineering have a refined understanding of client and market priorities in all facets of mechanical, electrical and civil engineering from engineering assessments and studies through typical and specialized design commissions, document production, contract administration, design/build, energy studies, field inspection and supervision, to building systems commissioning and consulting services for building operations