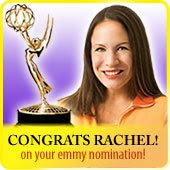 Why was the news of Rachel Coleman's Emmy Nomination NOT considered important enough to be on the main Blogs page?
*Pissed off*
My blog has been posted on deafread.com for the past six months and the ONE consistent message I continue receiving is TEACH YOUR KID ASL! Please explain why Rachel Coleman's (one of my favorite inspirational moms)EMMY NOMINATION was left on the Extras page???????????? She is bringing Signs to the mainstream population and single-handedly building bridges.
I would like to thank both the Steak and Shake Queen (we all know and love her as DEAFMOM Karen Putz) and Paotie (He is not merely a sex-crazed snow-boarder who likes big tits and blondes...he actually has a heart, as demonstrated by the sensitive tattoo on his ass cheek)for sharing the news.

This is my post from November 25th, check it out! Congratulations, Rachel...on an INCREDIBLE accomplishment that is so well-deserved...

And for those of you who missed Karen and Paotie's posts...here they are:

Karen Putz posted this on May 2nd...

Rachel Coleman of Signing Time Nominated for Emmy
"It's singing time and laughing time and playing time and now it is my favorite time, signing time!"

The first time I saw a tape of Signing Time, I couldn't get the lyrics out of my mind. I suspect that's one of the reasons that Signing Time has become successful in the mainstream. Little toddlers everywhere are listening to the songs, watching the videos and moving their hands to communicate.

Rachel Coleman, the mom behind Sign Language for Baby!,was recently nomimated for an Emmy. It's been an amazing trip for her, especially since the intitial production was a family affair with her sister and husband helping to create the videos.

I did an interview with Rachel several years ago when the Signing Time series of videos was beginning to take off:

Meet the Colemans: The Story Behind Signing Time

Congrats to Rachel-- all of her hard work has paid off!


Posted by Paotie on 5/08/2008 - [ 11 Comments ]
Denver - An alert reader of Paotie’s Green Couch has sent in a report that a children’s American Sign Language educational program has been nominated for an award at this year’s 35th annual Daytime Entertainment Emmy awards show in Hollywood. Rachel Coleman, star of the popular show, Signing Time, was nominated as an “Outstanding Performer in a Children’s Series,” according to the nydailynews.com web site.

Coleman, whose first daughter, Leah, was diagnosed as profoundly deaf at age 14-months, learned American Sign Language (ASL) to communicate with her daughter. Coleman would later decide to teach ASL to children and began producing Signing Time videos, which are available on CDs, DVDs, and through PBS stations.

A second child, Lucy, was born with cerebral palsy and a doctor warned Coleman that her child “was profoundly retarded and would never speak.” Then one day, Lucy signed the ASL word for more and “It was amazing that her first communication was in [ASL],” said Coleman. “Her next sign was ‘water,’ and though it wasn’t perfect, we knew what she wanted.”

Today, Lucy is in second grade, loves to sing and attends a mainstream school. Leah is now a fifth grader after skipping a grade, and recently won a spelling bee.

“If we had believed that doctor and not signed with her, she would have been locked in that body and not communicating. Now, she speaks beautifully.” - Rachel Coleman on Lucy

Not to be a downer or anything.. But why do people honor hearing people and not Deaf when it comes to ASL products for the public?

There is something wrong with the picture.

Shame on you all Deafread.com Editors... so you think smart?

I agree with you, Jodi.

I want a copy of Signing Times myself.

It protrays ASL in a positive light - that is what matters. So I agree shame on deafread editors.

I think theyre using some kind of a dartboard logic to determine what goes where and each editor seem to have a different sized dartboard.

Deaf258-- It's because her product is super popular. Perhaps you aren't aware?? I don't think there's anything wrong with that picture. She's done a great service for everyone.

Thanks for pointing this out Jodi.

Next time you can simply E-mail us asking for an explanation...there are many reasons why we put posts in Extra.

If I knew which one and when...then I'd be able to track down which human editor put it in extra and get their reasoning.

Sometimes it is as simple as a dead link...

HI J.J.,
You can call me Jodi. Please be aware that I am in NO WAY implying that the editors of Deafread.com intentionally did not place the post on "Blogs." The issue was a bit more profound than what would have been covered by sending you an email.
*See comment by deaf258*
However, in the future, I will definitely consider that email option.
Thank you very much for your reply.
Note: I posted Karen Putz's post from May 2nd, which is currently on the Extras page directly on this blog...you must have overlooked that.
Jodi

Thank you for taking the time out to explain who Rachel Coleman is. Now I scratch my head why it got booted to extra...

Deaf258,
Can you list any ASL dvd's or videos done by deaf people?

You can find a lot of things done by Deaf people at Dawn Sign Press.

I'm a little puzzled... I've long been familiar with Signing Time and have always thought the great show was for hearing siblings and hearing parents. How do we classify it as deaf-centric, which is what the main page is intended for?

I know Deafread.com can use criticism now and then, but I'm not convinced this is a constructive example.

This is a parent(Rachel Coleman) who "put down her guitar and learned sign language," when she learned her child was deaf. This is the type of parent that the Deaf Culture and Community want to embrace. This parent is bring her love for ASL to the world for everyone. I can't understand why she isn't attached to the front page!

I went to dawnsign.com. I can't tell what products are created only by deaf people. I e-mailed them. I will let you know.

I have never heard about Rachel Coleman...never saw her before...why? because she's hearing...so why should we know about her??? Agree with deaf258...this one is really insulting us...what's wrong with Deaf ASL products?????

Good gosh, I am behind on my blog reading!

Rachel is an entrepreneur who simply took her family's story and marketed it for many to enjoy. I taught a baby sign class at the local hospital and what drove many of them there were Rachel's videos. To me, Signing Time does a good thing by "hooking" people into finding out more about ASL and pursuing further classes--many which are taught by native signers.

And that's a good thing.

As for a Deaf-centric business and products, one would find more info at www.signsforintelligence.com.

Hmm.. I've spoken with other parents on reviewing ASL products for kids. I was told that Signing Times have mistakes in it. Do we want to be held liable for mistakes?? Again, no one bothered to answer my question:

"But why do people honor hearing people and not Deaf when it comes to ASL products for the public?"

Just because a product is popular doesn't guarantee the quality. Take movies for example, people were hyped up about certain films which sold out, but those films were considered "sucky" or a waste of time. To me, being popular is meaningless.

While it is great that Rachel put ASL in a positive light and did a great service, it still hurt the Deaf community because: one, she is hearing person who made it look sad that she "put down her guitar to learn ASL," and two, there are mistakes in her videos which other viewers will adapt the mistakes into their ASL vocabulary. Did she already do more consulting with Deaf ASL experts (and paid them for their time and efforts) to guarantee her products?? As for hooking the customers, there are two ways about it: the right way or the wrong way.

The Emmy's are for television shows. The Oscars are for movies. There are deaf themed shows as well as deaf actors who have been nominated and won these awards.

I agree let's see more mainstream deaf performers and media so that the deaf can be recognized!

You wouldn't believe how hard it was for us to get ASL on public television. Many stations felt there were not enough deaf viewers to warrant a show introducing ASL. Some felt Signing Time is too educational, others felt ASL was too narrow a niche.

The bottom line is hundreds of thousands of children have now seen ASL in their homes on their TV. When they see a child using signs they CAN communicate with them rather than stare and gawk.

I was tired of my deaf child being left out because so few people knew her language.

Emmy nomination or not. We have made a difference in the lives of children. We have helped hearing parents of deaf children see that having a deaf child is not the end of the world It is the start of a whole new world of experiences.

Countless children are growing up feeling like they have a deaf friend in my daughter Leah, whether they have met her or only seen her on TV.

This IS progress my friends and I am proud to be a part of it.