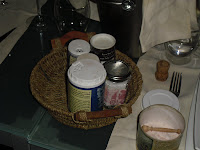 Last night, I was invited to a political dinner. A friend of mine is running for office here in town, and he invited a group of friends to discuss his candidacy. Loved the restaurant, amazing food and good company, except the man sitting next to me kept his back turned the entire dinner. I was introduced as being American, so I thought maybe he thought I didn't speak Italian, but at least people ask me where I'm from to make an attempt at conversation. He did not.

So, my friend and I walked outside between courses and I told him about this man's behavior. My friend asked me if I wanted to change seats, I said no, I would take care of it.

Note: the gentleman in question is an attorney. And the foodserver called him "Avvocato" which means attorney in Italian. The waiter did not call this man by his name the entire dinner. He called him Attorney. And the attorney never said, "My name is...." He just allowed himself to be called Attorney.

This blew me away.

I tried to imagine being out for dinner with my attorney friends, all of us in a big, happy group together and the waiter calling each and every one of them "Attorney."

So, anyway,  I returned to my seat. I tapped him on his jacket sleeve and asked, "What's your last name?" He told me. I said, "Oh, I'm not familiar with that name."
*Smile*
He turned his back.
I tapped him on the shoulder again and said, "My last name is Cutler."
He said, "I'll never be able to say that. It's in English."
*Smile*
He turned his back again.
He asked the waiter for more wine and the waiter said, "Ok, Attorney."

He did take the wine bottle and try to pour some wine in my glass.
Very nice. Very gentlemanly.
I will say this: I had an excellent time at the dinner, the group was laid-back and told some great jokes:-) And there was actually an assortment of salts-never seen that before in my life- for the record-I used Pink Himalayan Salt on my potatoes. Delicious.

And I do believe the next time I have a political dinner, I will request that the waiter address me as Mother Jodi.
Posted by Unknown at 1:29 PM