The Wise Child and the Ignorant Man

A week ago, while in a store waiting to take passport pix because of course my
kids' were expired and we're leaving in two weeks, an old man started talking to
me. I was concentrating on Jordan and Sofia who were getting into everything
they shouldn't be touching, so when the man asked me, "What's that thing on your
son's head?" I wasn't sure I had heard him correctly so I said, "I'm sorry, what
did you say?" And he asked, "What is that monstrosity on your son's head?"

*Breathe in, breathe out*

(It has been a long, long time since someone has asked me that question in such
an ignorant way. My last experience was through Val when she talked about the
haircutter.) I held back from smacking him, because that was my instant
reaction, took a deep breath and called Jordan over. I said, "Jordan, could you
please explain to this 'gentleman' what you have on your ear?" Jordan proceeded
with his "CI speech" by saying, "This is the processor of my cochlear implant. I
was born deaf and used to wear hearing aids. Now I can hear really well with my
cochlear implant." Jordan then walked away to destroy the store and the man
looked at me.
He said, "That's one great kid you have there.."
I replied, "Thank you, and extremely intelligent."
The man smiled and escaped from the store. (He's lucky he didn't get a kick in
the ass)

I'm writing this here because in the past two days, I received a photo from Ann
that showed Max explaining about the Cochlear Implant to his class at school.
Then, I read Val's Blog where she talks about how her kids talk to strangers in the elevator about how they can't hear when they go to the beach because they
can't wear their cochlear implant processors that help them hear. Yet, they
continue speaking even without the cis. 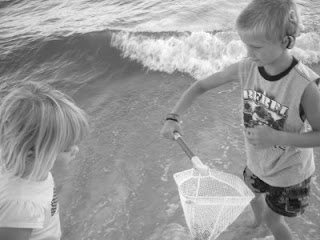 I would have never thought I'd see the day when my son would have been
independent enough to speak up for himself and to explain his deafness. It was a
constant struggle and I remember how just getting him to say his name was so
difficult for him. In the beginning, I gave that little speech to all of the
curious kidlings at the park, now finally Jordan can speak for himself.

So, to all of the new parents just starting on this journey, you will get there
too. We all reach different points at different times, but the shared
experiences are similar. You are doing everything you can to give your children
a voice, so that eventually-they will use it.
Hats off to all of you and Happy Father's Day to all the Dads... 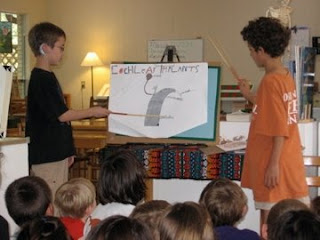 If speech and hearing determine the measure of our intelligence, then we are a sorry lot, indeed.

He said, "That's one great kid you have there.."

Ain't that the truth. Without the device of course. That makes one intelligent? Ya weird.

Dear Anon,
The capacity to educate others regarding something they may not know about determines the measure of our intelligence. What some may perceive as a disability, my son perceives as part of who he is to the point that he is able to explain how technology assists him in every day life.
The fact that he was able to have a conversation and look an elderly man in the eyes with great sensitivity and that he was happy to share his knowledge with this man...is an enormous sign of intelligence.
I think that you, too, could learn something from my son if you stop and let the real message sink in which defines this post.
Overcome YOUR prejudice and learn something from a twelve year old who knows that HE is truly intelligent because he loves himself enough to share himself with others.
Jodi

Anon 2 (1)...the device has absolutely nothing to do with this post...

I replied, "Thank you, and extremely intelligent."

Oh you said it. Interesting line of defense. Rather transparent that is.

That's a cute story. The kid educating the old man about why he wears CIs and doing it clearly and politely.

Yup, he's awfully smart. So is the old man for noticing it and complimenting him.

Dianrez,
I'll respond to you tomorrow, it's been since I read K.L.'s blog that I wanted to write a post on the subject, but things have been crazy..
Hugs,
Jodi
PS. You're right, it was very nice of the old man to say so...

I too have had my oldest (and second oldest) talk to their classes about deafness and CIs for many years, and yet still, there are moments. I was a chaperone on my oldest's trip to an amusement/water park. She kept coming up with reasons not to go to the water portion of the park. It did NOT add up. So finally I pushed her, and she said, "none of my friends know I'm deaf, what should I do?". I promptly pulled in the group, showed off the technology ;), and said, "o.k. if you want to talk to Delaney, just tap her. She's a GREAT lip reader". All was well- a gentle push (SHOVE) was needed, but all of her friends knew. She just liked to think they didn't. Confidence will ebb and flow, but I think sometimes a gentle nudge is all that is needed (or else I'm one of those *mean* moms). She had a great time, and after I asked her friends after the fact, it was not a big deal! Only to my daughter initially.

Self-confidence....it's once of those intangibles. Good for you guys :)

Jodi,
It is stories like these that give me just one less gray hair on my head, and I just pray Aiden has the self confidence to speak for himself and who he is. Way to go Jordan ... and way to go mom for teaching him to advocate/speak for himself ... like we should teach all our children to do, hearing or not.

HI Loudest Mom,
I'm going to translate your comment for the Italian blog...summer's here and yours is an important experience to share. Thank you...and it's true. So many times all it takes are a couple of words to make it all go a lot smoother. And until our kids are able to explain their needs for themselves...that would be our job!

Tammy- between you and his siblings...I'm sure Aidan will be A-OK! *smile* Do we have a date for Baltimore yet????