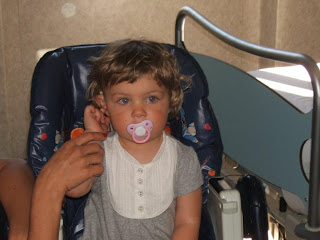 Hearing-impaired co-valedictorian delivering a message of inspiration
Despite challenges, United Local senior Jenna Greene graduating with perfect grade point average
"Parents, not only have you brought us into this world, but you have provided us with the nurture and care throughout our years. You have faced trials, struggles and obstacles with us. Never will we forget the love you have shown to us, from the day you held our hands and let them go as we entered the first day of kindergarten, to embracing us as we graduate from United High School..."

For someone once not expected to get past a fourth-grade reading level, a determined Jenna Greene has done just fine.

Along with her parents, she knows all about trials, struggles and obstacles. Maybe more so than most of us. Today, before hundreds attending the United Local graduation ceremonies, her address - including the above passage -will be spoken words of inspiration. They will be exceptionally meaningful. That's because spoken words are something she came very close to never hearing and in some circumstances still struggles to hear. Now her actions clearly speak volumes of what self-motivation and application can produce.

Jenna was only a year old when Brenda and Jay received the startling news that their daughter was profoundly deaf. They were told to anticipate and brace for all the hardships to come. That hers wouldn't be a normal childhood. That she wouldn't be a normal student. Well, let's just say a deaf ear was fully turned to any thoughts of discouragement.

This afternoon, Jenna will stand - and speak and be heard - during commencement as the school's 2009 co-valedictorian. Mainstreamed throughout school, she will graduate will a straight A average.

"It does not matter what cards you have been dealt. It only matters how you play the hand. My mother and father found themselves with a child that was diagnosed with profound deafness. Inside, they were shattered and their minds were pelted with foreboding questions: How can she hear? How can she talk? How can she go to school? How can she socialize? How can she succeed? Hearing aids failed for me and a doctor claimed that I would never get past a fourth-grade reading level. Those were the obstacles my parents faced as they searched for answers to help their little girl. If I had a single word to describe my parents, it is optimistic. Without that quality, I doubt I would be here. My parents provided me with cochlear implants and worked with me, and for this, I can never repay them..."

Brenda remembers Jenna having multiple ear infections as an infant. She would be playing and wouldn't react to noises around her.

"We thought that maybe she was just engrossed in what she was doing," Brenda said. But suspicions became reality when hearing tests revealed the profound deafness. It was caused by a genetic mutation. The particular disorder is very uncommon. That is, unless an affected child's parents are carriers such as the Greenes. Their other child, Jenna's older sister, was not affected.

As she grew, Jenna went through three kinds of hearing devices. Little benefit was provided.

The breakthrough came with cochlear implants. The cochlea is the auditory portion of the inner ear. Its core component is the Organ of Corti, the sensory organ of hearing. According to resource material, the surgically implanted electronic device provides a sense of sound to a person who is profoundly deaf or severely hard of hearing. The cochlear implant is often referred to as a bionic ear. Unlike hearing aids, the cochlear implant does not amplify sound, but works by directly stimulating any functioning auditory nerves inside the cochlea with an electric field.

The implant relays the incoming signal to the implanted electrodes in the cochlea. The speech processor allows an individual to adjust the sensitivity of the device. The implant gives recipients additional auditory information, which may include sound discrimination fine enough to understand speech in quiet environments.

In simple speak, the implants allow an afflicted person to hear or at least hear better.

Jenna underwent two implants, the second when she was freshman. From a very early age, she had to learn to hear and, in turn, learn to speak. She wears exterior devices behind each ear that works as part of the implant process. The exterior devices are powered by batteries, three in each ear. She goes through about 60 batteries per month.

On the first day of school, her conscientious mother would address her classmates. She would discuss Jenna's condition with teachers and her classmates. There were always challenges. For instance, something simple as hearing a recess bell on the playground. In junior high, she had to carry a microphone and speakers from class-to-class. "I didn't want to be different," Jenna recalled. "But carrying around a box is different."

Group discussions - requiring directional hearing -have always been a hearing hurdle to overcome. She would be left out of conversations.

Some kids - kids being kids - would make fun of her. She felt conspicuous. But she persevered. Being embarrassed or ashamed meant giving in. But she didn't have time for self-pity. She was busy being a fully functional and well-rounded child and, now, adult.

"It kind of motivated me to overcome obstacles," she said. "To take it on and not give up. The hearing loss taught me that. At times I felt isolated because people didn't always understand. But that's human nature. I'm different and I can't change that."

She stressed gratitude for the caring and understanding shown to her by her United Local teachers and her graduating classmates. She will thank her speech therapist today.

"My teachers were great," she said. "The people in my class were good to me. They would repeat back to me."

Mainstreaming - instead of relying on schooling for the deaf - became the right decision. "We just wanted to see what she'd do and she has done very well," her proud dad said.

The Greenes want to amplify a message of hope and not despair to parents with a child suffering a similar plight.

"Don't limit what they can do," Brenda emphasized. "Allow them to try whatever they want to try. The one thing I want to point out is early detection and monitoring." She stressed diligence and getting help from outlets such as parent support groups. There is a speech development window - speech needs to develop before an affected child is 7 years old. Or it likely never will.

"I would encourage cochlear implants for anyone like me," Jenna said. "I would tell parents that it may be hard but in the end it will be OK. There are times that will be tough and times that will be happy. Don't focus on negatives; let them make you stronger."

"It's not the end, it's just the beginning.... This day is a new beginning for all of us.... Graduates of 2009, your four years of high school are done, but what will continue to live on are your memories to be cherished, your abilities to be utilized, your desires to be fulfilled, your goals to be achieved, and your dreams to be transformed into realities.... You, class of 2009, have given me support since I entered United as a first grader, someone who had never attended a hearing public school before.... I thank my mother, my father, and my older sister for trumping the opposition, the limits, and the discouragement in this game of Euchre we played. I am now graduating from the same school as they did and, fifteen years ago, when I was three years old, they would not have imagined this possible.... Like Helen Keller says, keep your faces to the sunshine and the shadows will be left behind ...

Jenna will attend the Rochester Institute of Technology in New York. She will major in biology and hopes to become a pathologist.

The school provides an environment for the deaf and hearing-impaired. It includes about a 1,000 deaf and hard of hearing including about a 100 with cochlear implants. She will be able to connect but in her own admirable way has been doing that for years despite the barriers.

Jenna is adept a sign language. She said she will have the best of both worlds - signing with the deaf and talking to the hearing-impaired.

She said she will be a "little nervous" today when she delivers her commencement address. But be assured that her message of gratitude, hope and overcoming life's struggles will be heard loud and clear.

Heartening as it is to hear about young people achieving as much as this young lady, it is discouraging to also hear it being laid to the hearing aid or the cochlear implant.

Such individuals succeed mainly because of their native gifts and their response to the environment they are given: supportive parents, supportive schools and positive overall accommodation.

Tools such as ASL and the CI, which this person had, are helpful but don't in themselves deserve all of the credit.

Hi Dianrez...
Such individuals succeed mainly because of their native gifts and their response to the environment they are given: supportive parents, supportive schools and positive overall accommodation.

*I would have to agree with that*
Hugs,
Jodi

My Blog
http://www.wretch.cc/blog/markacey
Nice to meet you
Hsinchu, Taiwan

I love reading about Italy. Seggiano is my favorite place to go when traveling in Tuscany.

Hi Jennifer!
Seggiano is not too far from me...I'll do my best to keep you entertained:)))

PS- going to check out your blog- nice to meet you too:)

I've been trying to figure out a good place to begin the acai berry free trial & was wondering if anybody had any thoughts on whether or not the stuff works for dieting? So far here is the 1 [url=http://acaiberries.blinkweb.com/new-blog.html]article[/url] I have been able to read online that seemed realistic for what my goals are. Thoughts?

Here's a very informational website I've discovered so far regarding dieting and weight loss information. Her story at [url=http://suesdiary.info]Sues Diary[/url] is inspirational to say the least.

I've used that stuff at [url=http://suesdiary.info]Sues Diary[/url] myself. I tried the colon cleanse and had great results.