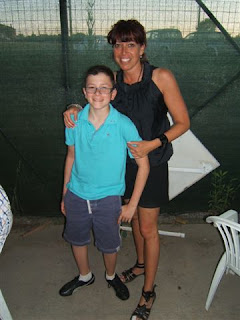 Well, off we went to Siena to meet with Rabbi Eli last Wednesday. Jordan insisted we take the train which is like an extra hour as opposed to the bus, but since he was willing to wake up at 6:30 am, and I actually prefer the train...done.

We arrived at the door of the synagogue at 9:25 am for our appointment: Bar Mitzvah lesson number one. Rabbi Eli opened the door, I was wearing a jacket over my sleeveless top because I got an evil eye the last time I showed up half naked at our appointment- note: it was like 95° and humid, but I was respectful this time. I do have to add this one particular- I have managed to find without a doubt the HOTTEST Rabbi in the world...young, interesting and straight from Jerusalem.

So, he asks us if we would like some coffee, we respectfully decline and take a seat. You have to understand that he is from Jerusalem and has been in Siena for eight months. He's married to an Italian woman (HOT!)and speaks Italian better than I did when I first got here, but with some difficulty nonetheless- his English is excellent. (I am sure God was watching over me for this one!) He began the lesson by asking Jordan what he knew about Judaism.

Jordan responded: "I know that 6 million Jews were killed in the Holocaust by the Nazis."
My jaw dropped. I remember once he brought home a fighter airplane that had a Swastika on it and I almost passed out. I then explained to him about the Holocaust, but I didn't think he remembered it.

Actually, since finding out about Jordan's deafness and starting the oral approach, abstract concepts were inconceivable to teach, I basically shut my religion out of my life. If we couldn't live it concretely by going to synagogue, spending the high holidays with family members or having him attend religious school, there was no way to make him understand certain aspects. I just always told him he was Jewish and tried to teach him morals and values that my family taught me.

So, when he began to have an intelligent conversation with the Rabbi, I sat back and evaluated my sensitive son. Every now and then the Rabbi would look at me and smile. They opened a prayer book and Jordan said the Shemah aloud..hmmm, got slightly teary eyed at that one.

Then, the Rabbi said, "Okay Jordan, let's take a tour of the synagogue."
I immediately threw a scarf over my sweater...the Rabbi laughed.
Jordan donned his kipa proudly, and in we walked.

We had been inside the synagogue the last time, but this time it was just the three of us. It isn't a very large synagogue, but it's intimate. The women sit on the left and the men on the right, in the middle is a sort of pulpit where the Rabbi speaks and front and center is the Arc. The Rabbi walked straight back to next to the Arc and took out a key. I started shaking.

I hadn't seen a Torah in twelve years. God, I'm getting teary-eyed thinking about that moment. There was my son, standing next to a Rabbi, who was opening the Arc to show him the Torah. When he opened the doors and I saw the silver, I had a flashback from when I was eight years old, bored to tears sitting through a Shabbat service. If there was one thing I waited for during those endless services, it was seeing the Rabbi take out the Torah. That...and the ginger ale drink with lemon sherbet at the kiddush. It was all about my grandfather and my family as I watched Jordan's first peek at the Torah.

I lost it. They both looked at me like I was crazy. I don't know why this is happening at this point in my life because I am already on the verge of a nervous breakdown, but it was just one more example of finding a part of me that I had lost or slammed the door on..I lost my religion, and found it again last Wednesday- with my son.

When they closed the Arc, they then proceeded to the pulpit where they read a prayer together that Jordan needs to learn for his Bar Mitzvah. I cried on. At a certain point the Rabbi said, "Okay Jordan have a look around and if you have any questions let me know."

So, Jordan began walking around, inspecting the wooden benches. At a certain point, he said, "Rabbi, you know, there are termites in these benches!"

We took a coffee break, I spoke to the Rabbi and asked him a couple of deep questions about life as Jordan played with his PSP. He told me that a Rabbi was once asked to describe the entire Torah in one word.
I asked, "And what was his response?"
Rabbi Eli replied, "Peace."

Just then, Jordan walked outside and asked what was written on the blackboard. We went inside, the Rabbi erased what was written and wrote something else. He asked Jordan, "Do you know what this says?"
Jordan said, "No."
Rabbi Eli said, "This is your name, Jordan, written in Hebrew."
Posted by Unknown at 2:34 PM