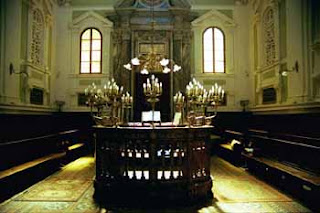 My Pop was the most important person in my life. He ruled the family with an iron arm and a generous heart. He loved Jordan and I broke his heart when we moved to Italy. During his last months of life, my Pop was very sick and lived his illness with great dignity as he had lived his entire life. He used to talk about his time spent in Napoli during World War II, it was his way of feeling closer to Italy and his grandchildren. My grandfather was a religious man and had great faith. When he passed away, I made a promise to myself that I would find a way to get Jordan Bar Mitzvahed.

When Jordan was diagnosed as deaf, it was very difficult teaching him to speak Italian. It was extremely difficult trying to teach him abstract concepts such as religion. The only religion he has ever lived has been with Luca's family during Christmas and Easter dinners. For me the most important aspect of religion aside from having faith, is that it offers occasions for the family to unite. Teaching Jordan what it means to be Jewish has been more of a concentration on values and the belief in God than the teaching of Hebrew, the meaning of Shabbat and other religious holidays. It is impossible here in Italy, also because I am a Reform Jew and the synagogues are all Orthodox.

My neighbor across the street also happens to be Jewish and his son lives next door to him, so actually my street is like Pikesville- so strange. I've spoken to him often about my dilemma and this morning he put me in contact with the Rabbi from Siena.

The Rabbi listened to my situation and despite the fact that his synagogue is Orthodox, he has agreed to begin meeting with Jordan and me. I broke down on the phone as I was explaining about Pop and what exactly having Jordan Bar Mitsvahed means to me after what we have been through these past years. I can assure you that it's times like these that I strongly feel the fact that I have been away from my family for 12 years. I also told him that he was about to meet a very special young man.

My son, who turns 13 in August, is going to be Bar Mitzvahed in the Medieval Synagogue of Siena. It will be an intimate ceremony of just family members, maybe even only four of us...no extravagant party, no presents, no glitter and no fuss...just Jordan, us, and Pop.

*Prepare the kleenex*
Posted by Unknown at 3:53 PM

Wow. How special. Just another gift you're giving him that he may not "get" now, but certainly will soon.

That is absolutely fantastic!

What a moving history :( Hey let give me time to buy and save kleenex boxes...

MAZEL TOV! What a wonderful tribute to your grandfather. Your family will remember this special occasion forever. How lovely of the Orthodox rabbi to agree. :) Hugs from America, darling.