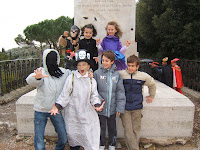 OOOOOOOH! I mean BOOOOOOOOOOOOOOOOOOOOO! Halloween just kept getting better and my husband, after carrying around the camera the entire Halloween party because I wanted pictures for my blog (what a man!)even downloaded some photos. I happen to have a double chin in all of them, so, sorry, you won't get to see me in my witch's costume! (Time-out to describe your basic American woman living in Tuscany nightmare...I have never, never seen as many stick-thin, beautiful, well-dressed women in one place in my entire life. Women wear make-up,heels and Prada to walk their dogs and to take their kids to the park. They stand in groups smoking cigarettes and every now and then glance over to make sure their kids are okay...which they are cause they're playing with the ball they stole from my kid...)I divert, back to Halloween...I dressed my kids up, as shown above, we went a little on the darker side this year. Basically, because I loved the hat I got for Jordan, paired it with a white somethin-somethin I found in a bag of play costumes my friend Susie gave me, and added a little green for the funky, zombie effect. I spray-painted his head black, why I don't know because he never took the hat off, and had a moment of crisis when I realized that the spray wasn't drying and he had to put his FREEDOM processor back on his head. So, after I washed down his left side and he put on the bte we were good to go...except Sofia was crying in the bathroom because she wasn't really accepting her new look of black, funky hair and green face. She calmed down when she asked her dad, "Babbo, would you still fall in love with me even with this hair (sounds more normal in Italian:))?" and Luca said, "Yes!" She then started laughing as only her dramatic, schizophrenic self can, and we happily left the house for the party.
The party was highly respectable this year, orange and black cobwebs, illuminated pumpkins, games, trick-or-treaters and this year, the majority of kids were actually in costumes with a couple of adults wearing Halloween-themed hats (my favorite was a ghost on the head made of some funky material resembling puffy styrofoam). 95% of the kids were in witch costumes, 4% were wearing the SCREAM mask (saw a cute deviation with a tongue sticking out of the mouth) and the remaining 1% was a ghost.
As you can see in the picture, Carnival was present...check out the confetti!:)

Oh, how I miss bobbing for apples and eating the marshmallow off the licorice string! (NOTE: there are no marshmallows in Tuscany :)) I also miss my mom's jar of Pond's Cold Cream, the only gunk that takes the junk off of sweaty, grungy, made-up Halloween faces. BTW, my shower has been slightly tinted black by three painted heads...And a good time was had by all...especially because the best part of Halloween in Italy is (drumroll please...)THE NEXT DAY IS A HOLIDAY BECAUSE HERE IN THE HEART OF THE COUNTRY OF THE CATHOLIC CHURCH, TODAY IS SAINTS' DAY AND NO ONE GOES TO WORK...especially not my mother-in-law, so we shipped the happy kidlings to the mil and mom and dad hit the town for some pizza. We went to our old standby BIG PIZZA and you can imagine my surprise when I saw all of the patrons wearing witches' hats!!!! Every single customer in that restaurant had a pointed black hat on top of his-her head - sponsored by Heineken (so I had myself one) and suddenly I felt all warm and gushy inside...Halloween HAS finally Arrived!!!(PS. I cannot tell a lie, a couple of women wearing perfect make-up, heels and Dolce and Gabbana, who had apparently just been to the Beauty Shop DID NOT wear their witchy hats! But some serious progress is being made here in Tuscany!!)
PS. Go to my friend Val's blog, her kids Gage and Brook carved a jack-o-lantern with bilateral cis!! http://www.deafkidscanhear.blogspot.com/ (Yes, I know I'm still having computer difficulties...workin' on it)
Posted by Unknown at 4:26 AM