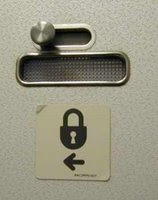 Well, we made it home. The flight was smooth except for two things: there was a one hour thunderstorm just when we boarded at Philadelphia (apparently my bags were left outside in the middle of it because I'm still drying clothes), so we had to sit for an hour and a half without moving..love that.
And...
At about 2 am USA time, Jordan felt sick.
We were sitting in a row of four seats. He was on one aisle seat and I was on the other with Sofia sitting next to me and a seat between the two of them. At a certain point, he leans over and says, "Mom, I'm going to be sick!" He was holding the vomit bag.
I said, "Run to the bathroom!"
He got up and started towards the bathroom, that was the moment I realized that he didn't have his processor on because he had been trying to sleep. I tried to get his attention, but the plane was dark and he had already begun running.
I was on one side of the plane and he was on the other and the only thing I kept thinking was that he would be throwing up in the bathroom, locked inside and not able to hear me.
I ran around the plane to his side, but he was already locked in there.
We talk a lot about CI moments, but this was one of my first "Deaf" moments. Sounds odd, but it's true.
I started shaking the door, but like softly because I thought someone would come after me.
I paused and shook again.
I slightly began becoming agitated, when after the fourth shake that at that point was earthquake, he opened the door.
He read my lips, "JORDAN, YOU CAN'T HEAR ME AND I CAN'T HELP YOU IF YOU LOCK THE DOOR!!"
He said, "Oh yeah."
So, he left the bathroom door unlocked, I stood outside the door, and all's well that ends well.
Well...I had him put his processor back on and told him not to ever take it off again on the plane. I also told him to hold onto it tightly when he goes to the bathroom;-)
Home sweet home:-)
Posted by Unknown at 5:56 PM

OMG! My heart was racing for you reading this post. What a scary couple minutes!!!!! You must have been seeing red. Glad you're home and everything went well for you. Wish I could have seen you when you were in:( Well, one of these days the kids are going to beg for you to take them to Hollywood...and then I'll get to see you:)) xoxo

Poor Jordan! Aside from hoping he felt better, an observation seemed in order: how flustered hearing people get faced with a "deaf situation".

Were this to happen with a person used to being deaf from birth or parents used to it, it would be nothing. (wiggle a paper under the door.)

Panic because the CI is off? Sometimes it is more of a convenience for other people than vital for the individual.

Glad everyone is home safe and well!

hey, this situation is going to happen more than often.

you and Jordan need to learn adapt and be creative. Not panic.

I also should remind you that Jordan may not like people telling him he must wear CI at all time.

Growing up, people touch my ears to see if I am hearing them (wearing my HAs now CI), asked me if I am wearing my HAs, or ask me to turn up my hearing aids (nowadays, it's "I think you need a new mapping")

... even from my own father-in-law thinks he have the rights to ask me these type of personal questions. Imagine your father in law come up to you, and tell you to "wear your CI"

See, See!!!! The old wiggle the paper under the door...effective! I usually blink the lights to get his attention during the night, and that somehow seems wrong to me. Let me just say that HE wasn't the problem here, I was. His neurotic mom. He's a big boy, he can take care of himself. But sometimes that fear is still there.

He doesn't mind when I tell him to put on his processor, that's never been an issue, but sometimes I mind when I hear other people telling him to do it, so I can understand about your father-in-law.

Thanks for your replies, I miss the exchanges...it's been a busy year and I miss everyone.

Debbie...I had a chocolate snowball with ice-cream at the Pikes and thought of you and your cravings...I personally, will beg my kids to take me to Hollywood when they're older:-)
Love to you all...