YOU...are the Surgeon, BUT I am the Mother 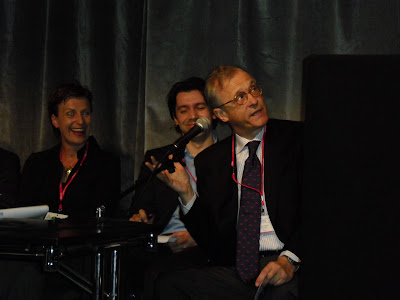 There before me...a panel of seven cochlear implant surgeons from France, England, Germany and Italy, Gwen Carr, PhD and Dr. Giorgio Lilli from Italy, as well. The panel was led by Dr. Gerry O'Donoghue also known as the Godfather. I sat next to the Empress during the discussion. I have to say the discussion was extremely interesting, especially the opportunity to hear what surgeons internationally had to say. I asked a couple of questions.
My first question was "Parents must go through the amplification process using hearing aids before surgeons will consider proposing a cochlear implant. This period is extremely brief and while I was once told that conventional hearing aids are the way to go for profound hearing loss, surgeons are now advising parents to buy more expensive digital hearing aids for that brief period of time. Given the fact that if a child has a profound bilateral sensorineural hearing loss and will most likely be, in fact, a candidate for a ci, is it really worth the extra thousands for the digital hearing aids as opposed to conventional ones?"

I was surprised, but at least I now have my answer.

To the question posed by the moderator, "Are bilateral implants more effective than one implant?"
An Italian surgeon responded, "Actually it was God who decided that one."

At a certain point a slide was shown (I had a picture, but my camera got wiped out and lost it)that indicated, based on a study that I can't name- it was in the camera, children receive results ranging from 10 to 90% improvement as a result of the ci.
Obviously, this is a very broad level of achievement. The question was asked, "Do you tell parents this range of possible achievement when the parent is considering the ci?"

All of the surgeons said, "No!"

Parent members of the audience screamed, "YES! Parents have a right to know this information when evaluating the ci."

The surgeons then clarified. First of all they disagreed with the data. Then they said that they would not have shown the study to the parents, rather they would have explained the importance of keeping the processor on at all times, auditory-verbal therapy and parental involvement in the process.

After years as a CI Circle member, I see that the study has a foundation. There are children who are enormous "success" stories, and there are also children who struggle. The factors mentioned above are critical.

My second question was this: "I read a study discussing how a child must not be kept under the effect of anesthesia for too long, that this may provoke learning disabilities in the future. Does this affect your viewpoint regarding sequential vs. simultaneous implantation?"

It was agreed that ci surgery should take no more time than 3 and a half hours. (I did not know this)

Then, a question was asked directly to me- "How has your experience been as a parent interacting with medical professionals?" LOL, perfect question. I responded that I was in no way forced into a cochlear implant, that I had to actually, insist. I find that other parents in Italy, live the same situation- they are told that their child is a candidate and then it is completely their decision to make based on the research and information provided.

Gwen Carr insisted that sign language be used as a bridge during communication gaps.

Regarding parental choice in communication methodologies, Pauline Walker, Deputy Director of Families, NDCS closed with an excellent comment reinforcing that parental choice, the need to inform parents and consider parents as members of the team was fundamental. She drew a line between the surgeons and the families that Gwen Carr then clarified by saying, "If you'd like, I can discuss procedures in cochlear implant surgery."

The point being: Each element of the team involved in taking our children from Newborn Hearing Screening to Cochlear Implantation has a specific role that must not infringe on the ultimate power of a family to make educated decisions for their children.

Not to worry...we, the parents were present.
Posted by Unknown at 12:38 PM

One good reason to invest in high-powered digital aids, even during the trial period, is that a child might benefit significantly in the "better" ear, even if he is still a candidate in the "worse" ear, and end up bimodal like Ben. The best situation is when there's a loaner program, so that families can have access to the best hearing aids while not having to shell out money for what may be only temporary usage.

I cannot help not to notice the study that you mentioned,

"At a certain point a slide was shown (I had a picture, but my camera got wiped out and lost it)that indicated, based on a study that I can't name- it was in the camera, children receive results ranging from 10 to 90% improvement as a result of the ci.
Obviously, this is a very broad level of achievement. The question was asked, "Do you tell parents this range of possible achievement when the parent is considering the ci?"

Could you be able to get the information on that study? I am very, very interested about this. If the parents really wanted to know this information, then I'd be happy to publish on my blog if possible.

Thank you so much,
Amy Cohen Efron

As a profound deaf since birth. They can hear through HA. Just saying.

Anonymous, I guess you didn't know that most, if not all, CIs are implanted when the candidate is beyond the help of a hearing aid.

I don't know about the surgeons, but my concern is that parents will say, "10 to 90% improvement? Deal!!" And they will see only the figure 90% or anywhere near that.

I have been been told by experts that they don't actually understand how a cochlear implant works, which is one of the reasons why they can't predict the final result. Other factors such as hearing history play a large part too.

ANY amount of hearing improvement is a huge bonus over insufficient (and possibly declining) information from a hearing aid.

I am still amazed to read (elsewhere on the internet) of people not listening to surgeons or experienced CI users, allowing themselves or their child to wear a CI for brief periods each day, because they don't like the sound or because the child wants to sign. There's a lot of ignorance out there so thank you for helping to inform!

Hi Jodi, I was very interested in hearing about the surgeons not sharing with the parents about 10% to 90% success rate. I would imagine this will help the parents understand that the cochlear implant itself doesn't do the trick, but that it comes with intensive parental involvement and constant exposure to language. The surgeon's job is to educate the parents fully the pros and cons, not to withhold information. I hope you will continue to share this essential tidbit with other parents.

I knew I forgot something. Sure enough.

Julia...the loaner program is an excellent idea- any info?

Dianrez- I think I'll translate and quote you on that one.

Mishka- I agree. Ironically, when the question was asked, "Do we give the parents this data?" I was shaking my head no, guess I felt guilty about that- but I don't think presenting a study without explaining all of the factors is an accurate representation of what the ci can offer, maybe based on my experience with Jordan...so my feelings of guilt prompted me to place it here, with an explanation as to the possible motivations behind that 10%.
xoxo to all

Amy, Marc Marschark and Peter Hauser edited a book, "Deaf Cognition," in 2008 I think. It has a long and detailed chapter about the factors that predict success with cochlear implants. Fascinating reading, especially for a fellow school psychologist. :)