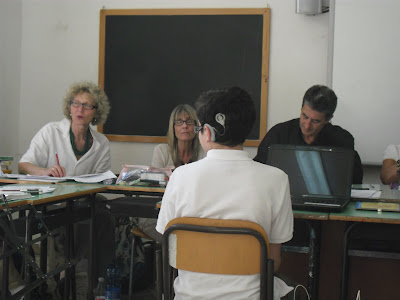 First of all, thank you so, so much to everyone who left comments about AB 2072. I appreciate that whenever I request information there is someone ready to assist, and then...I become informed. So important. I left the comment that I still have to visit the links provided, because...........................
JORDAN HAD HIS MIDDLE SCHOOL EXAM TODAY AND WE HAVE BEEN STUDYING!!!
This is what happened.
Luca and I prepared the powerpoint for his presentation: 30 minutes before a panel of 10 professors.
I think I was much more nervous than he was...I will never understand how he is so calm.

Jordan's topics were Auschwitz, New York, Coca Cola- history, advertising campaign and logo, Andy Warhol's "Bottles", and the history of the guitar.
He sat by the computer and used the slides as a reference point as his History, Geography, Italian Professor sat beside him firing question after question.

Luca and I were able to observe and I asked if I could take pictures: permission granted:-D
I will say this: Jordan responded to every single question, every single question. He remembered the names of films they had seen in class, the names of poems, descriptions of characters- I know for sure that he was present in class, not just physically but completely. I can't describe that feeling to you, but it is a damn good one.

At a certain point, his teacher looked around at the other teachers to see if they had any questions and they kept giving her the go ahead sign and continued saying...no, no he's doing great.

And he was. He was calm, spoke like a freaking historian. And then, he played the guitar... 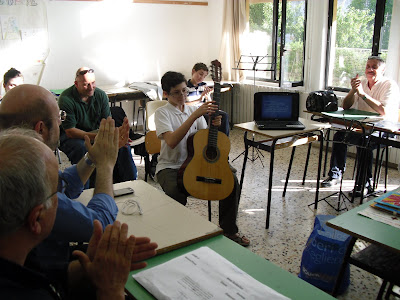 Can you tell I'm amazed, because it's been five hours since he finished the exam, and I am still amazed!

I don't know. I'm really, really proud of Jordan. He is coming into himself, and I am so blessed to be by his side as he grows. 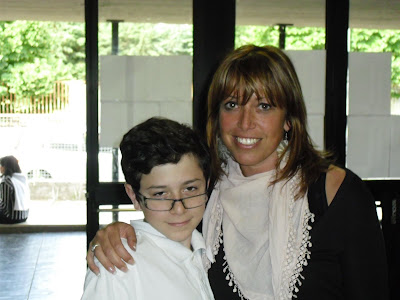 This made me recall the moments when I would watch one of my kids at school assemblies and feel my blouse buttons getting suspiciously tighter.

Kudos to all of you! May you have many more such feelings!

Mazel tov! This brought tears to my eyes. He is an amazing, smart man, much like his mama! :) Hugs from across the ocean!

Congratulations. Of course he would do very well, with you as his mommma! )

This is awesome Jodi! Your proudness shines through your words! Congrats to Jordan and all his hard work and to you in all you've done to help get him to where he is today!

Congratulations to Jordan for achieving the middle school exams!