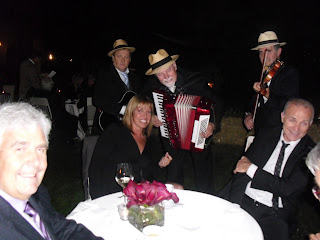 When I began writing this blog, I wrote and wrote for the comments. Because the comments for me were validating, communicative, interactive and I felt desperately alone in a Tuscan tunnel. Then, time passed and the situation evolved- I wrote for myself- I had this overwhelming need for self-expression. Now, I write to share, because the most bizarre series of events continues to occur. I write because maybe there is another mom who can benefit from the mistakes I've made, who can realize that it's okay to make mistakes because life and most of all, our kids, are extremely forgiving.

When I go to a Congress, I become the Congress. I live, breathe and absorb the new information, the fascinating people and the passion they throw into their jobs. I don't stand still. I can't. After being in a tunnel for eleven years, and it wasn't a bad tunnel, it was where I needed to be at the time...bring on life.

Our session was a tremendous success. The room was jam-packed and despite the heavy audiological content, a majority of people remained until the end. Audiologists and neonatologists came from all over Italy, Anna Orato blew them away when she announced that she was deaf with a cochlear implant four minutes after she began her speech. I saw the participants in the room freeze. And I beamed.

After the session, I checked my email, the one time during the entire congress when my internet key worked...to find an email from a journalist of Corriere della Sera- major national Italian newspaper - asking me to contact him. I called him and he proceeded to tell me that he had already interviewed a Professor and my pediatrician for an article on the importance of Newborn Hearing Screening, that he had read my blog and wanted my permission to quote me on some things I had written.
*Ok*
Obviously, the newspaper went on strike so the article did not appear, but we're hoping it will be in Sunday's paper. He told me he would cite the blog and facebook forum. Can you even imagine????

Next, I met the Professor from Jerusalem responsible for the the Israeli-Italian Pediatric agreement. He happens to be the same man responsible for passing Newborn Hearing Screening into a national law in Israel. His daughter is a speech therapist.
*Smile*
After I managed by miracle to get an invitation to the President's dinner, in, um, the FOUR SEASONS HOTEL - a hotel transformed from a medieval convent- we dined in an outdoor private garden- he approached me again to discuss our Audiology Network. The following words actually came out of his mouth, "Would you be interested in presenting at the Pediatric Congress in Jerusalem in May?"
The world stopped.

I lightly touched his jacket with my index finger, hesitated a millisecond and replied, "Yes."
(Nothing is definite, of course, but the question made the table)
I sent him an email the day after the Congress ended.
He replied the next morning and asked me if he could refer our resources to the Israeli Minister of Health.
*Pinch me*

I was wined and dined and intellectually enriched. I attended pediatric sessions on bullying in the schools- where there was an excellent speaker who addressed the issue of homosexuality and bullying- and children's reactions to violence in the homes.

The quality of speakers and the passion with which they spoke opened my world.

Florence by night is something every person in the world should live, whether you stroll the streets with a gelato in hand or you're pushing the baby carriage, arm in arm with a loved one...
I lived it absorbed in Newborn Hearing Screening while sipping on Chianti and savoring a really thick bistecca alla Fiorentina.

All thanks to my son.

Amazing.
Posted by Unknown at 5:01 PM

While advocating early screening is great, we do need to keep a mind on stuffs like this: http://www.physorg.com/news198772934.html

Some people may not be able to afford to keep up with mapping and such and may not give their child a language and probably worst off because they put too much hope on CI. So don't forget to stress how important language is for the deaf child.

I wonder if there is a solar powered chargable battery for developing countries.

Right on! Sounds like a thrilling and transformative experience. I haven't been wined and dined recently, but I do marvel sometimes about the worlds that have opened up, the people I've "met" (mostly online), the vast amount of information I've absorbed, and the personal growth I've experienced, all on account of having a deaf kid. Who knew??? Enjoy the fruits of your hard work.

BTW, I mentioned the Nutella milkshake to some colleagues, and I must admit I felt very cosmopolitan as I casually referred to "a friend in Italy".

UCH! It's been so busy and I don't know how I missed this post and the one right after....

I am so unbelievably awed and humbled by your veracity, grace and intelligence (yes, I said grace and I meant it). You are such an impressive woman and mother. You encompass it all, lady. Keep the great stories and work coming.