I'm sending you this link because of your involvement in the hearing impaired community.


This is a crazy story. The author of the book lived in my community. She had twin sons that were turning 9. A Jewish family that belonged to my congregation.


On the morning of their sons' 9th birthday party the father, Neil Jacobson methodically shot and killed the boys in their beds and their mother.


He was too cowardly to shoot himself.


The story is horrific. It happened last January. Frankie & her sister Sherry co-wrote this book that went into publication about a week before she was shot.


I was thinking about you when the book first came out, given your past experience as an author of a children's book also dealing with helping young children cope with impairments.


Perhaps you can spread the word about the book to those who may be interested. The proceeds will go to Franki's sister. So sad that Franki never got to experience the success of selling her book.


Her asshole husband is awaiting trial in a Palm Beach County prison.


If you google his name you can read all about him.

I then went to the page she linked and found this message from the author: 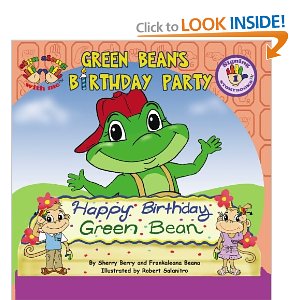 
Go to Amazon.com and type in Green Bean's Birthday Party to view the format, cover, and back cover.


We combine American Sign Language, rhyming and reading in this book. The key signing words are highlighted by two adorable characters, Signing Sammy and Signing Suzie who wear "Magic Signing Gloves" to demonstrate how to sign. This book has an engaging story and colorful illustrations that will capture the attention of a child and encourage communication. Within our research there is no other book similar to ours. We have a new and innovative approach to teach children 8 months to 4 years old communication skills through a signing storybook.


This is an educational as well as an entertaining book. More parents are teaching their kids sign language since it decreases tantrums and frustration, and increases IQ scores, vocabulary, communication, and self- confidence.


This book was published December 2009 and is currently sold on Amazon.com.


This is the first of a series of signing storybooks by Sign Along With Me.

Hearing impaired community...huh? One thing I know is that my deaf child is not "impaired" at all. I wish people would start to realize how offending that term is. Deaf or hard of hearing is way more politically correct.

OMG, what a tragedy. Why on earth? It sounded as if the mother was succeeding and the boys' progress validated in the book publication, and then to have it stopped just like that. It might have happened even if there were no problems, but what remains is elemental: why??

There is a groundswell against the words "hearing impaired" that has been building for some time. It's both irrelevant (hearing) and demeaning (impaired), and gives no sense of the capabilities of deaf/hoh people.

I almost changed that, but decided to leave it the same as the focus was on the rest of the post...

Please- before you called someone "a coward"..e.g. "cowardly", read the articles re. this situation.Mr. Jacobson was suffering from a sverve depression. This is not an excuse-but he was very,very depressed.