Jordan's Essay (translated from Italian to English) for a writing competition with the title of the competition being: Different Yet The Same 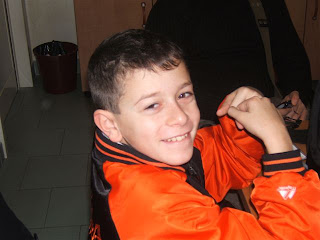 I was born deaf. And, I was born in the USA. These two things make me very different from other people. I began going to speech therapy when I was twelve months old, four times a week. I hated it, I would have preferred playing or relaxing. At the beginning, I wore two hearing aids that helped me to hear. My speech therapists Iris Lolini and Gabriella Gullotta helped me to learn to speak by teaching me new vocabulary. Slowly, I learned how to speak Italian.

Then, I started pre-school and I found a lot of children who were different than me, who I had never met before. Despite the fact that I didn't hear well and I still didn't speak well, I made a lot of friends. We played soccer, built castles and played war.

After pre-school, I began Elementary School in Istia- a new class with new children. I didn't really like the new school at first, because there was a boy who picked on me and made fun of me because I didn't speak very well. I was frustrated. My support teacher, Giulia, helped me a lot in class when I had difficulty understanding the other teachers. The kids in my class helped me but I threw a lot of temper tantrums and was often sad. I met my best friend Simone in first grade. He invited me to sleep over his house and we realized that we had a lot in common: we both liked playing Playstation, using the computer and playing basketball.

I had a lot of fun with Simone, but the school classroom was very noisy and full of confusion. I couldn't hear well enough with my hearing aids, so after much debate my parents decided to have me undergo cochlear implant surgery in Pisa. I had the surgery when I was eight years old. I have to say that I had a very different Christmas that year. Santa came to visit me at the hospital and my grandmother prepared a huge Christmas lunch that we ate on hospital beds, everyone all together. Having the surgery was scary and my friends were worried about me. In fact, when I returned to school, they all clapped for me. My mom came to school to explain some important things to my class. I remember that for the first time, everyone in my class was silent and listening to what she had to say. They helped me carry my schoolbag and they started changing their behavior towards me. I changed a lot, too.

Although I am deaf, I speak well enough. They called my mom and I to appear on National television to talk about being deaf and the cochlear implant. My mom told me it was important to go so that other parents of deaf children would be encouraged by seeing me in what is a very difficult period for parents. I played the piano on tv and I talked about my experience. I explained all of the things I hear.

With the cochlear implant I hear all of the sounds around me a lot better. I hear the birds, my sister screaming, the television, my grandma on the telephone, my American grandparents on the computer speakers and always a lot of noise in class. I used to play the piano, but now I play the guitar and attend a middle school that specializes in music. The first week of my first year of middle school, the teacher asked everyone in the class to explain something special about themselves. I stood up and spoke to my class. I said, "I am deaf and being deaf, I understand that people can sometimes be scared of the cochlear implant processor I wear on my left ear. It's a little strange. Maybe I sometimes speak in a different way. Maybe I don't always understand when people are talking to me. Being deaf makes me different and many times, people are afraid of what they don't understand. But, like all of you, I play Playstation, watch the television, play baseball and play practical jokes." My class applauded, and I felt a lot more comfortable.

I am now in my second year of middle school. I have to say that in class I feel different than my classmates. They talk a lot and this creates some difficulty for me. I am very fortunate to have a classmate named Martina who helps me a lot in addition to my support teacher. During this last period, I've been working a lot harder to try to do well in school and I've brought up my grades considerably. I'm a lot calmer than I was before. Every now and then we have to do a guitar recital in front of an audience to demonstrate how we have improved our ability to play the instrument. Every time I have to play before an audience I get very shy, but in the end, I always do well despite my nerves.

I've started to look for a girlfriend, but until now everyone I've asked to go out has said they just want to be friends. I'm a little sorry about this, because I know I would be a really good boyfriend. In this case I'm not very different from my other schoolfriends, just a little less fortunate...the women just don't understand me. For now, though, with my cochlear implant, I can ask all the girls I want without a problem.

I would like to end this brief story by saying that being born deaf has made me different than others my age, but I am sure that we are the same in the way I love my family. And with my cochlear implant, I can tell them directly or by telephone.

OUTSTANDING job Jordan! You have already won the competition in my book! I am so proud of you and I love and miss you! Nauno

You should be very proud of him! I love the part about girlfriends!!

Could he be any more adorable? Love how referst to the girls as "the women" and how they don't understand him...typical preteen! Love him.

He can hear his sister's screams? Really? How loud?

Psst....make sure Jordan to behave when he seeks a girl. Make sure you watch "My Girl," acting by Macaulay Culkin before you give an advice to Jordan. Perfecto. ;-)

Jordan is so confident about himself and his parents have done a great job raising him thus far. Hats off to you guys!

I'm curious to know how well Jordan can hear...because with my 30db loss with my hearing aids I cannot discriminate words in songs that I listen to. I can get about 50% and often misunderstand words that sound alike.

Jordan sounds so adorable! Speaking about getting a girlfriend, he sure sounds like my youngest kid when he was at Jordan's age. Once my kid who is now 17 1/2 years old said he was trying to get a girlfriend, most girls wanted to be friends only. However, all of sudden, almost overnight he got one, other girls were all over him like bees to honey. *gasp* So adorable. Of course he still has his girlfriend for over two years.

*Grinning* Already looking for a girlfriend... I am sure Jordon would make a very fine boyfriend.

Aww, so cute about the girlfriend bit.

You've got a winner right there!

Jordan! I love your essay! You expressed yourself so well and I can see the 'spirit' within you.

Keep shinin' and there will be a very lucky girl out there who will appreciate and loves you the way you will love her.

Jodi - what can I say? You indeed raise a very fine young chap!

Thank you for sharing Jordan's story with all of us.

Especially, sharing Jordan's spirit with all of us too.

Kudos on raising such a fine articulate young man! Can't wait to see what he's like grown up...and such a typically Italian man! Don't wear any clothes with buttons on them...

Well the two outtakes where he cracked up made me laugh out loud. I so enjoyed reading what he had to say. I can tell he's happy with his implant, and also it sounds like he was sad before his implant.

Thank you all-lol- I will refer your comments to Jordan...*smile*

Just beautiful! What a heartbreaker you've brought into the world!

Jodi - May I have a copy to share with the other speech therapist that I work with ?

That is such a wonderful esssay. Brought tears to my eyes. LOVE the part about the girls!

Jordan's absolutely adorable! Tell him to keep up his advocacy!

Hi everyone!!!! Thanks for your amazing comments- taking Jordan to Pisa now to meet another mom who requested his presence. Advocacy starts now *smile*
I'll write later!!!
Jodi
Debbie- I changed the white font to black so you can copy and paste Jordan's essay to a word doc.

Bravo Jordan! We have some cute girls here in NYC and your Mom should bring you here!!!!

Jodi, Jordan is just incredible and you must be so proud of him. I can't possibly say more than all these other faithfuls have said. I agree with all of them.

I gotta say this... beautiful essay!! I was so moved by it! I agreed with commentators above that Jordan is the winner in our book!

You are a great mom just doing the best for him like every mom would be.

That was beautiful! How amazing he's already advocating for himself! I bet he'd be a great boyfriend ... those "women" just don't know what they're missing! Love it!