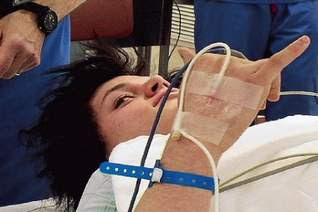 *Note from me...before reading the article - ponder the title (Um, I'm not too happy about it)*

It was a major milestone in Chris Bryson's young life.

The Sussex County teen, who was born completely deaf, received a cochlear implant and had the device activated a month after surgery this spring at the Atlantic Rehabilitation Institute of Morristown Memorial Hospital.

In the days and weeks that followed, the 16-year-old learned to adjust to a new sensation -- hearing for the first time.

All while the cameras were rolling.

Chris, who lives in the Lake Walkill section of Vernon, will be featured in an episode of MTV's "True Life: I'm Deaf" airing on Sunday.

The award-winning documentary series, which showcases real-life stories of young people, shot the episode last winter, offering an intimate look at Chris' life before and after surgery.
Filming took place over six weeks at various locations, including at Chris' home, at Morristown Memorial Hospital and at Mountain Lakes High School, where Chris will be a junior in September.

The school has a program where hearing-impaired students -- who once attended the Lake Drive School of the Deaf in Mountain Lakes -- can take mainstream classes.

Chris, who was familiar with "True Life" and MTV's other reality shows, was one of two individuals selected for the episode on young people receiving cochlear implants and learning to hear.

"I was pretty stoked," Chris wrote in an e-mail to the Daily Record. "I've seen (the shows) all the time and I imagined what it would be like if I was on a show that everyone can see. I can't believe this is actually happening ... I feel like a celebrity right now."

Marshall Eisen, executive producer of "True Life," said the one-hour episode fits the series' primary focus on the experiences, niches and subcultures in the lives of young people.

"True Life: I'm Deaf" features the lives of both Chris and Amanda, a 22-year-old college student in Maryland who also was born profoundly deaf.

"This was an idea that came up that we thought would be really interesting -- to see how people who are deaf navigate through life, through the world," Eisen said.

"It's just a really kind of deeply felt emotional topic that has a lot of visual and sort of experiential moments that can make for compelling TV."

"He had this quite interesting story of receiving a cochlear implant and allowing us to be there through that process and see what happens," said Eisen. "It's a pretty extraordinary moment, to see him hear ... to watch him take on this ability that most of us take for granted."

David Bryson, Chris' father, said his son -- the second-oldest of five boys -- received his first cochlear implant at the age of 7. The first device, a 1.2 model, was defective and emitted a constant whine before it stopped functioning, David Bryson said.
At that point, Chris stopped wearing the speech processor attached to the implant, but he was only able to communicate through sign language for years, said Gina Bryson, Chris' mother.

"When he got to be older, and more like a teen, his desire to communicate verbally kept increasing," she said. "His own desire was to have a device that works."

The Brysons learned that Advanced Bionics, the California-based manufacturer that supplied Chris' first cochlear implant, would replace the device with a more advanced model for free.

The company, which creates state-of-the-art hearing technology, also agreed to pay for Chris' surgery to have the new implant installed and activated, said Gina Bryson.

After Chris decided to have the surgery, the family learned of "True Life: I'm Deaf" through Advanced Bionics.

MTV had contacted the company, seeking individuals ages 16 to 24 who fit the bill, and also issued a casting call.

Three weeks before Chris was scheduled for surgery for the new implant, Gina Bryson e-mailed and sent photos of Chris to the network. MTV responded immediately, requesting permission to film, she said.

"It all happened very fast," she said. "The next thing we knew, they were here, filming."

New York-based Gigantic Productions, which produces the show for MTV, sent a two-woman crew to the Bryson home and then to the Summit Medical Group in Berkeley Heights, where Chris underwent surgery for the implant in February.

The cameras even captured some squirm-inducing moments, such as the incision that Dr. Jed Kwartler made in Chris' skull, right behind his ear, to install the implant, said Gina Bryson.

"I was a little uncomfortable initially, but was willing to do it for the sake of what we were doing," she said. "I just felt that it was something people should see and rejoice with us." 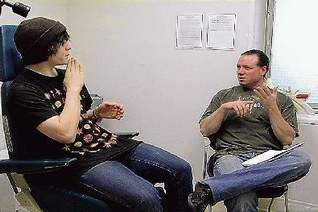 Following the surgery, Chris let the incision heal before heading to the Atlantic Rehabilitation Institute at Morristown Memorial for activation, or mapping, of the new implant for two days in March.

Christine Hoffman, lead audiologist at the Atlantic Rehabilitation Institute, said the Harmony model implant that Chris received processes sound more efficiently and is more frequency-specific than the 1.2 implant he previously had.

Hoffman, who also programmed the first implant that Chris received as a youngster, said she was conscious of the cameras recording her every move but was only asked by the producers to explain certain procedures.

"In the beginning, of course you're nervous that people are filming you," she chuckled. "But I totally forgot that they were there."

For Chris, the filming experience was "pretty fun," especially following his surgery when he engaged normally with his family and friends at the local basketball courts and skateboarding park.

Months after his surgery, Chris is happy with his new implant and is looking forward to speech therapy when school resumes in September.

"I just love everything about it and it helps me hear a lot ... it's more improved," he wrote in his e-mail.

"But it's pretty difficult because I haven't been practicing (speech) in a few years without the cochlear implant. ... Right now I'm working on it, and I'll always try my best no matter what."

Filming "True Life" gave him "the best courage and faith," he said.

"I'm so happy that everyone can see what deaf life is all about, and I hope they can understand deaf people," he wrote. "I think it's gonna be different seeing myself on MTV ... It's pretty wicked, man."
Posted by Unknown at 7:25 PM

From Jersey too :) I can't wait to watch this!

(big wince) I'm with you on the title--"once deaf"~! Hopefully the program will show the truth and he doesn't come up at the end fully hearing and speaking and perhaps singing as well.

Let me know how it went!!! Can't get much way over here...and as another (hot)mom on the Circle asked, "Why did he have to wait eight years for another ci???"
Jodi

It was an awesome show!! Eight years ago when he was seven he was overwhelmed with all the sounds; he described. His entire family has always signed and so when he decided to not use the device; it was acceptable as everyone knew sign language. He went to a public school with a deaf section. In other words the deaf had interpreters with them.

He did very well in enjoying sounds on the episode. Very cool!!

Thanks, Kim!!! I would have loved to have seen it...hugs, Jodi

It was wonderful. I cried as I watched it. Abbie and I texted back and forth during the breaks. I see some of my life in Amanda. I have great friends in high school and college. I had the self-confidences to continue my education even with my deafness.

I hope you get to see it, Jodi. It was interesting.

I did see the episode. It was very interesting and I could find myself relating to those two people, since I am deaf myself, with a cochlear implant and have "okay" speaking abilities.

Because of Chris, he made me realize how much the cochlear implant means to me. It has impacted my life a lot, and I hope it does for Chris too. He does deserve to be happy.

And for Amanda, I felt so bad but I felt so much better at the end when they showed the updated information.

This definitely was one of the best episodes by the show.

I also was glad that they did emphasize that Chris would have to work hard to be able to learn how to hear/speak using the cochlear implant throughout the show.

Bravo, MTV. You did a great job.

Rachel...try to remember that we will be leaving the house despite all of the materials you are bringing...IT'S SUMMMMMMAAAAHHHHHTIME,GIRL! THANNNNKS, COUNTIN' THE DAYS! Jodi

Hi Jodi,
This has nothing to do with this particular blog entry (sorry), but I thought, as an author, you might be interested in the following. My apologies if you've seen it already. (and I'll feel like an even bigger moron if you've even blogged on it already!)

Whoops -- the full link got deleted. Try this:
http://tinyurl.com/5fg4nb

Thanks, Lydia!! I love Sharon's blog, don't know how I missed this one! Really good...loved the chapter! Jodi