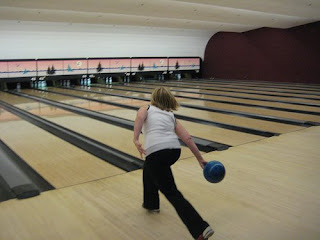 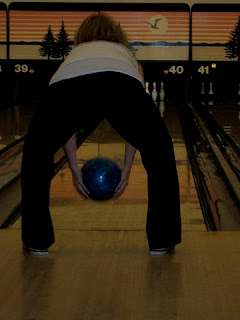 Contrary to how she bowls, New Jersey Cover Girl Cochlear Implant Advocate, Abbie, (who we ALL know and LOVE) NEVER talks out of her Ass...

Abbie left this thoughtful comment on my post: To Implant or Not To Implant a Child Who Has Never Been Amplified (Note: One day...we will hang out, and it will be UGLY!)

I want to inject a comment because of what I saw at this past convention. I had the opportunity to meet many people that have been deaf all their lives and decided to get a CI. Many of them were simply curious to see what makes a sound, they communicated through ASL and they did not speak. I came upon this couple who has never heard a single sound, but they decided together that they were going to get a CI. And they did, together, same day surgery.

Mind you this is just one of many "Lanes" that I met but I was drawn to this particular couple. They reminded me of the couple in "Hear and Now." I latched onto them and asked them what made them decide to get a CI after being unable to hear for the past sixty years. They told me they just wanted to hear sound. Their expectations were very low because the doctors and audiologist stressed that the benefit to someone who has never been amplified is low. They were put through psychiatric session to prepare themselves. They forged ahead not expecting miracles.

They still cannot speak but they are happy with what they can hear. Is that a benefit? Absolutely! I asked them whether the technology was around when they were younger, would they have gotten the CI knowing that the benefit would have been just the same?

They said yes but they might have not stuck with it because of the transition period of learning how to hear.

It has been said that you can never measure the success of someone else's cochlear implant journey because it is personal, but they were happy with the benefit that they did get.

They represented the grown up versions of the 14 year olds that you are talking about. They were placed in a setting where they were "mentally prepared" with a psychiatrist on what to expect. If this same technique could be used on parents to mentally prepare them on the limited expectations, I would say yes. If this type of support structure were not implemented, I would say let the child make his own decision when of age.

5 years ago my brother and I decided to do our CI journey together after being profoundly deaf for 40 something years. We speaks very well after a hard work of speech therapy and worn bilateral HAs as a young kids. We wish that CI was invented way back then.

We are happy that kids at young age are being implanted. It just warms our hearts to see how much they are benefit from CI.

Realistic expectations is the key. We now know a lot more about what those expectations are than we knew 20 years ago. It is too bad that those expecctations could not have been clear when people were being implanted in the early days.

I think most implant centers are doing a much better job of giving realistic expectations than they used to, and that is resulting in a lot more people happy with their implant experience. Better implant techniques resulting in fewer complications is helping also.

i was implanted at 30 and i am an ASL deafie. i wore a hearing aid all my life and i have no intelligible speech. environmental sounds give me pleasure. now i just can no longer tolerate hearing aid sounds as they are so neanderthal! i hear wayyy so much sound of the whole wide world and i choose to hear my ci and forego my ha on my other ear. my expectations were realistic vand i am pleased pleased with the outcome!!!!

Thank you for your comments, it's amazing how much I learn from this blog...about arguments I would have never thought to discuss had it not been for other bloggers such as Abbie. Stay cool!...Sweating my butt off here in Italy, Jodi

Jodi,
You said this couple cannot speak.
What you REALLY mean is they cannot use their VOICE.
There's a difference, and it's how we perceive things.
This couple obviously spoke with you. They may have done it "differently" than your traditional, but...they sure as heck CAN speak!