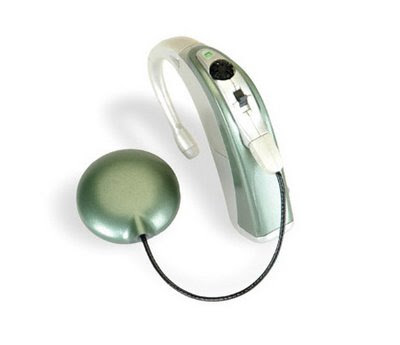 I had my first AB implant done on the right in August of 2005. It worked great for a few months, then I started "hearing" loud popping, sounds like paper crinkling and the power cutting in and out. The device was failing. In December 2006 I had my left implant done an the right was a hit and miss. From the moment of activation the right didn't work right. A few electrodes were shorted out. I ended up having a bilateral revision done in March of 2007. The results, the right failed due to moisture and the left due to electrodes shorting out.

Both AB products, made by two different manufacturers. I am the first bilateral failure the clinic I went to has ever seen. Not to mention a bilateral failure for two entirely differnt reasons. The implants I have now are stll AB. Frankly I didn't want to use AB again, but my insurance wouldn't cover the other. As a result of the revision surgeries I lost what little natural hearing I had left. The blogger that said AB and the FDA are working this out...yep they sure are the FDA filed a 2.2 million dollar law suit. Sadly, the highest amount they could ask for. My opinion. AB got greedy and cut corners. At the expense of the very people they were suposed to provide a service to. They never even notified the FDA that they were using Vendor B, as Vendor B had not been approved by the FDA. If you want interesting reaading read the actual warning letter the FDA sent to AB and the lawsuit filed by AB. They can be read at http://www.pretiflaherty.com/mediacenter/news/items/2008_03_26_209.asp

I have never posted on a blog, but after reading some of the comments I was moved to do so.

Those who are saying that the whole AB fine is directed at something in the past are completely mistaken. It started in 2002 and AB continued to ship devices without the proper testing manufactured by a non FDA manufacturer until 2006. The proof is in the FDA lawsuit filed recently. Again take the time to read all the information. AB didn't even notify the providers they had shipped the defective implants to...again do the reading. The FDA letter to AB spells it out as does their lawsuit. I can guarantee we will all be reading about private lawsuits being filed.

As a AB receipient it's sad to say I can't recommend their product. I know what I've been through and am continuing to go through as a result of their poor QA/QI programs. While I certainly don't wish what I'm going through on anyone, I wish it had happened BEFORE I made my original decision on which company to go with. It certainly would NOT have been AB.

I debated for a couple of weeks whether or not to post this comment. Then, at the NHS 2008 Conference I met a gentleman who works for Advanced Bionics, who suggested that I email him the complaint and he would send me some type of response. I sent him the complaint two weeks ago and still haven't received a response. I am not a very patient person, so I apologize for not having waited another two weeks for a response.

I will assume that the letter issued by Advanced Bionics on July 14th is a sort of response. It was issued here, I'm going to re-write it because I can't copy it from the pdf. Here goes...

Today, Advanced Bionics agreed to settle a matter with the U.S. Food and Drug Administration (FDA), resulting from a decision we made in 2003. That decision concerned a determination that no formal FDA submission was needed when we added a new vendor (Vendor B, later terminated in March 2006)to our manufacturing operation. Four years later, in 2007, the FDA filed an administrative complaint against us stating the FDA's belief that a formal submission should have been filed. We responded to the Agency, pointing out that it had already approved both vendors when it approved the system.

While we do not agree with the FDA, we do believe that accepting its terms is in the best interest of our patients, our company and our need for a long-standing relationship with the Agency. So, we have decided to settle the matter, with the company paying 1,1 million dollars, and me, as CEO, paying 75 thousand dollars.

Over the years, we have increased our focus on the reliability of our entire implant system. At present, our internal device (Vendor A)has a 2 1/2 year CSR of 99.1%, and our external product durability leads the industry. That being said, we expect that the quality of our products will only get better in the years to come.

As we move forward, we are stronger than at any moment in our history: singularly focused on cochlear implants, well funded, possessing better leadership in key positions, and having a strategic plan built around patient care.

We very much look forward to continuing our partnership in this community. Please call me if you have any questions about these or other matters.

I hope this situation can be worked out. I have two AB implants in my ears and I love them. I'm sure I would love Cochlear or Med-El if I chose them, too. I had a hard choice, but it was my choice. I even knew about the recall before my surgery. I looked at it as a positive situation since recall usually means improved product. It improved my hearing, so I'm doing the happy dance.

Keep us informed about the situation. Remember some situations are dealt with behind the scenes and take awhile to complete. It can also be the process of gathering information. I'm not patient either, but give it time. Have faith and harmony! In my words make a long island ice tea sit back, play some music, and enjoy the night. *******

It's me...Kimberly. I posted about my AB experience a few months ago. Obviously, I've been following the AB/FDA lawsuit and resulting settlement. My take?

Well, I'm hesitant to really voice my honest opinions. Sometimes it's more prudent to keep them to oneself, so I will keep the majority of my thoughts to myself. I believe everyone should form their own opinion by doing the research and not allowing themselves to be blinded one way or another. Let me give you an example:

What I will say, and this is just my opinion based on how I would react if I were being sued wrongfully. IF I HAD done everything I was supposed to do according to the FDA guidelines. I would have fought turning any monies over tooth and nail. I would have provided all the documentation to prove I followed all the mandated guidlines I was supposed to follow. I would have provided copies of all the documentation I gave to the FDA notifying them of the change of the manufaturer I was using and cleared myself of the allegations, Then countersued for my costs. I would have fought it openly, posted all my supporting documentation and proof that I followed all the guidelines on my web sites and kept the fight as open and public as possible. In other words, I would have done eveything possible to "clear my good name". Especially if I had the financial reserve to fight. (AB received a pretty substancial amount of money from Boston Scientific last year. The amount was disclosed on the web in the buy/sell agreement). However, I'm a fighter, and when I'm falsely accused, I'm going to fight to clear myself, my name and my reputation. But, that's just me.

As far as the response of AB "In the best interested of our consumers"...again prudence tells me to keep my opinion to myself. The one thing I will say....when a device fails (and I'm not even going to begin to address the failure related to the moisture issue. I have VERY strong feelings about that and I AM going to keep my lips zipped on that one. Sometimes being "prudent" is tough). ANY failure is a HUGE problem, but when it's related to a BASIC issue, that would have been detected had the device simply been tested PRIOR to leaving the manufacturer....it would have been caught. Period.
(I'm talking about the basics. Like a car company not starting an engine to see if it runs before sending it to a customer who special ordered the vehicle).

I know I keep going back to the car as an example. I do so for a reason. We are a pretty safety minded society. We wouldn't get behind the wheel of a 6000 pound machine if we knew if was unsafe. We count on the auto companies to build a car that is safe for those driving, being transported and traveling along side it. If we are that careful as a society about the safety of our transportation we should be even MORE vigilent about the saftey of our medical devices.

I'll close on one final thought:

Medical devices of ANY kind, not just class III, are designed to improve, safeguard, enhance or even restore life....and HOPE for millions of people everyday. The vast majority of them do just that. Millions of people are alive because of these wonderful devices. People hear, see, eat and breathe because of them. Whether it be a heart lung machine that keeps someone alive during open heart surgery, or a simple IV catheter that infuses life sustaining fluid and medication into a premature baby fighting to stay alive, or a cochlear implant that has given a deaf person the ability to perceive sound.

However, that being said, the companies that manufacture these products have a RESPONSIBILITY to do everything in their power to ensure their products are safe and DO NO HARM. Every now and then, something unforseen and unpreventable happens. It's tragic, and an ACCIDENT. However, when these companies decide NOT to follow the safety guidelines, the Federal Laws and something happens then they SHOULD be held accountable.

Attorneys from Weitz & Luxenberg P.C. are currently representing those injured by failed cochlear implants, including certain of the Advanced Bionics HiResolution 90k (HiRes90k). If you were a recipient of an Advanced Bionics HiRes90k Cochlear Implant, and have experienced physical or emotional injuries due to a malfunctioning implant, please contact us at http://cochlear-implant-lawyer.com/ Firm attorney fluent in ASL. Thank you.

Hello,nice post thanks for sharing?. I just joined and I am going to catch up by reading for a while. I hope I can join in soon.

Understandably your article helped me very much in my college assignment. Hats incorrect to you send, will look audacious for the duration of more interdependent articles promptly as its united of my pet issue to read.