Mother Fights System to Get Help For Deaf Son 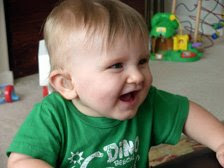 
The hours after a baby is born are supposed to be filled with happiness and elation, not shock and disbelief. Babies should be crying in their mother’s arms, not being run through a battery of tests. But that was recently the case for a local mother and her husband.


Luke Hrncir will undergo a procedure July 13 to install cochlear implants in the hopes that one day he will be able to hear and speak.

Less than 24 hours after Laryssa Korduba’s and husband Matt Hrncir’s first child, Luke, was born, it was discovered their new baby couldn’t hear and was ruled “profoundly deaf.”

It didn’t make sense to Korduba. Both she and her husband were healthy, there were no signs of abnormalities during her pregnancy.

Emotionally devastated, confused and distraught, the new parents left the hospital with their new child, but with very little direction and instruction as to what to do or where to go next.

“It’s a horrible thing to happen to new parents,” she said. “They sent us home with nothing. It was exceptionally scary.”

Over the next few weeks, as Luke failed a series of hearing tests, Korduba took it upon herself to find the help her son needed.

“My instinct was to figure out a plan,” she said. “People don’t realize the importance of getting help so early.”

After searching through the maze of the Internet, and finding several dead ends, Korduba and her husband discovered a non-profit organization in Houston, The Center for Hearing and Speech.

When asked why they chose the organization, Korduba said, “There’s nothing else.”

Early on Korduba and Hrncir realized there were two paths for Luke. He could either learn sign language and live his life never learning to speak, or somehow find a way to speak and live as close to a normal life as possible.

By working with the staff at The Center for Hearing and Speech, it was determined that Luke met all the requirements for a cochlear implant, a surgically implanted electronic device that can help to provide a sense of sound to a person who is deaf.

According to the National Institute of Deafness and Other Communication Disorders (NIDCD), cochlear implants bypass damaged portions of the ear and directly stimulate the auditory nerve. Signals generated by the implant are sent by way of the auditory nerve to the brain, which recognizes the signals as sound.

Korduba explained that Luke, who has been on hearing aids since he was five weeks old, doesn’t get much help from them.

“With a hearing aid, you have to force them to use the little hearing that they have,” she said. “Being profoundly deaf, he doesn’t get a whole lot of help from the hearing aid.”

Once it was determined that Luke would undergo the procedure and get the implants, Hrncir and Korduba applied to Hrncir’s insurance plan for seemingly sure-fire coverage.

But the insurance company didn’t agree and denied their claim, deeming the procedure “not medically necessary.”

“They said Luke was too young and that it would be considered elective surgery,” Korduba said. “Luke met every specific criteria a child could meet. But they denied us anyway.”

Once again, Korduba and her husband were nearing a dead end. The procedure would cost $127,000 per ear without insurance. So Korduba lobbied for help, contacted Luke’s surgeon, turned to friends and even spoke with U.S. Rep. Michael McCaul, who worked to get the ruling overturned.

Finally, the insurance company relented and agreed to pay for part of the procedure. Luke is scheduled to have the surgery for the implants on July 13, 12 days after his first birthday.

Three weeks after that, Luke will be fitted for the outer portion of the device, which, Korduba hopes, will help him begin to hear.

“I want him to function in a hearing world,” she said. “I want to hear him call my name. I cannot wait for that to happen.”

Following the procedure, Luke will undergo tri-weekly therapy sessions to get him used to hearing and begin speaking.

Now that her son is on his way to living a more normal life, Korduba looks back on their ordeal with concern, not for her, but for others who may be in the same situation. “I’m an educated person and I had difficulty managing the system,” she said. “Many people may not know where to go.”
Korduba wants procedures put in place to identify what the next step would be.

“The theory is there’s not much you can do. But that’s not true,” she said. “Research all of your options and don’t take no for an answer. Don’t be scared to ask your physician questions and get answers to your questions. Make your doctor find someone.”


*I love aggressive moms who fight for their kids*
Posted by Unknown at 2:16 PM

Oh boy... I see the hospitals need to develop resources (information sources, unbiased counseling, etc.) in place for any newborns, so that the parents would have information in hand, feel they are not alone and lost.

It's so discouraging that this kind of thing still happens. Even with universal hearing screening (which only catches 50% of hearing losses, per Rachel), parents are left with no guidance and no clue as to where to go next or what to do. They cannot see any future for their deaf baby except one in which only hearing and speaking is possible. And this happened in Houston, TX, which has a deaf community, including a DEAF clinical neuropsychologist fluent in ASL!!!

Wouldn't you think that the resources and efforts of the Deaf Bilingual Coalition (DBC) would be so much better spent at hospitals and clinics where infant hearing loss is first diagnosed? Then doctors, nurses, audiologists, and hospital social workers would instantly be able to lend a helping hand by putting parents of newly identified deaf babies in touch with the deaf community immediately.

Anonymous...I believe that all resources regarding choices in methodology should be offered to parents, so that each family has the information necessary to make the best choice for their family. Thank you for your comment. Jodi

Oh, I agree. I mentioned DBC because I know that's one of their aims. But these poor parents didn't even get a referral to AGBell ... their local deaf school ... local deaf community agency ... a university with a speech-language program ... an audiologist. ZIPPO. Isn't that a disgrace? I'm not opposed to CIs, AVT, speech, or ASL. It's all good, as far as I'm concerned. Information is the key.

"He could either learn sign language and live his life never learning to speak, or somehow find a way to speak and live as close to a normal life as possible."

That's greatest blessing of being a part of the deaf community -- a deaf person can feel normal even if the hearing world doesn't think they are normal. Believe me, there's nothing worse than going through life feeling like you're not normal.

Parents need to know that "normal" encompasses a great variety of human beings, and any kind of "difference" does not have to be "abnormal," nor deserving of pity. If all parents of newly diagnosed deaf infants had the opportunity to see the variety of deaf people, many of whom are living satisfying and fulfilling lives, including doing well in school, having a language of any kind, having families, and holding a job, they might not feel so overwhelmed or saddened, at least not for long, that their baby is deaf.

And EVERYONE, especially doctors, audiologists, speech therapists, parents, etc., need to know that deafness does not always mean zero hearing, speech, or communication ability. Within our community is a lot of diversity in residual hearing, use of amplification, speech ability, signing ability, cultural identity, life experiences, cognitive functioning, and personality types.

I'm kind of dreaming up something similar. The audiologist that comes in contact with parents or anyone could take a proactive position in helping people understand their options for their children, or even help adults educate about their hearing loss and the different communication methods.

It is a shame that these parents who find out that their child is deaf is presented with very few options and even less to go on. I was born in a non-internet age and my parents had nothing to go on but what the doctor and audiologist told her. Perhaps parents wouldn't be so afraid if they had the information and the resources.

As the Mom in this story, thank you for all of your thoughts and comments. I think no matter which direction parents decide to go, not being given any direction at all is NOT ACCEPTABLE to anyone. Uniform procedures in all hospitals would at least offer a roadmap to all the avenues available to parents. If anyone does get this push for uniform procedures going, please let me know if I can be of any help.

And just fyi, Luke had his surgery on Monday, and he is doing great. Thank you for your thoughts and prayers.