You Know You're in Tuscany When... 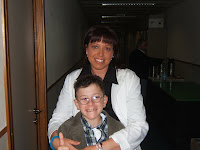 You know you're in Tuscany when your son's class takes a fieldtrip to the OPERA!!! Jordan attends a public middle school that specializes in Music Education. He goes to school six days a week from 8 am to 1 pm (all Italian middle schools and most elementary schools have this schedule) and returns to school for an extra three hours a week for acoustic guitar lessons, group instrumental lessons and Music Theory. He also has a private tutor one hour a week who helps him study what he has done in school and teaches him the electric guitar (cause that's a "cool" instrument!).

Because he goes to this school specializing in Music, they try to enrich the students' musical appreciation with as much exposure as possible to various forms of music. Apparently, the opera is in town with "La Traviata." It is times like these that I really understand how much he hears with his implant because he came home from the opera and explained the names of the characters, the plot and even told me his favorite character:Alfredo "the lover." (surprise surprise!)

He has just upgraded his processor from the Esprit 3G to the FREEDOM so I am constantly asking him, "Were the kids too loud in school?" "Can you hear okay?" so the obvious question here was, "Did the music bother you?" He said, "The voices were so loud they could have broken glass", but that is actually an acceptable answer when someone asks you how the voices were at an opera:) He loved it! My deaf son loves the opera! This is another miracle of the cochlear implant!

Living in Italy has its ups and downs, but life just doesn't get much better than this. I am 35 years old and have been living in Italy for 11 years...I have never in my life been to the OPERA. My 11 year old son is a highly cultured young man, at least when he isn't playing Playstation or eating dirt on the baseball diamond!
Posted by Unknown at 1:54 PM