Adventures in Advocacy: Rome by Motorscooter 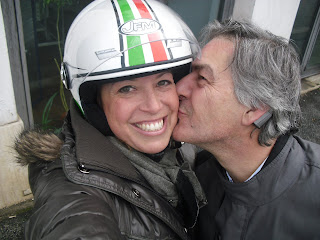 I was born, as my family likes to say..."Scared of my own shadow."
Once upon a time when I was about 10 years old, I had a blue Huffy Charlie's Angels bike- my first and last bike. At about 10 years of age, I shot up and have always felt strange on the seat of a bike. I avoid two wheels, always.
In Italy, on the other hand, most people are born to ride a motorscooter. They can drive one at 14 years of age, so they're everywhere and I must say, extremely convenient.
I had an appointment with an attorney in Rome who last year, represented a Deaf woman who refused to pay her television bill, citing that she is Deaf and her favorite television program was not closed-captioned.
The Italian forum had requested that we get involved in some way to either improve captioning access or reduce the rate of the television bill because that access was limited. I had contacted the attorney who gave me an appointment in Rome to discuss a possible collaboration. Corrado, a member of the forum who lives in Rome sent me an email via fb asking me if I needed a personal driver while in Rome. I said, "Ok!"
He showed up on a motorscooter:-)
Never, in my life had I ever been on the back of a scooter. But I had to make it to the appointment.
He whipped out the helmet. I put it on, threw my bag in the back and hopped (sounds cooler to say it that way) on the back of the scooter.
As I was in apnea for the first five minutes, I grip-locked the side of the scooter and Corrado's jacket. I had one of those surreal moments where I couldn't stop smiling, because NEVER would I ever have imagined to be whipping through Rome on the back of a scooter.
Amazing experience:-)
In any case, the result of the meeting with the attorney was that the RAI- the state-owned Italian television company actually has a technical commission that includes associations representing the Deaf Community. They have improved their closed-captioning service and have vowed to bring the percentage of closed-captioned programming to 70%.  The problem is that the captioning is oftentimes not a reflection of the actual audio and the level of the Italian is many times lacking.
If anyone has any ideas as to how I can motivate an improvement regarding captioning, please leave a comment.
Thank you:-)
Posted by Unknown at 8:53 AM

It is best to write a suggestion of blogs for others and myself. I stumbled upon your web site two days in the past once I was surfing the internet, unfortunately I am not really into the blog thing. Not because I don't fancy blogs, but greater than likely because I am slightly behind to them.