Me and My Shadows 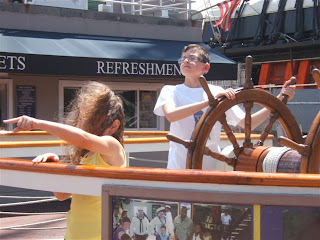 When they aren't killing each other, chasing each other, screaming, yelling, kicking and instigating..they...are the most perfect brother and sister in the world.
They give tag-team a whole new meaning. Sofia is Jordan's shadow and he deals with it until he can deal no more, then, he walks upstairs and enters videogame land.
I am so happy I have two kids.

My mom is in heaven. The latest is that whenever my mom speaks to Jordan in English and he doesn't understand something, Sofia will flip back her hair, hold up her little fuscia polished hand to my mom and translate in Italian.

I am no longer a Mamma, I have become a referee. Which is fine by me.
Yesterday we went to Chuck....E....CHEESE!!!!!! And we had the best time. Before we went, my mother-in-law called and I listened as Jordan spent ten minutes explaining to her the concept of Chuck E. Cheese that does not exist nor have an equivalent in Italy. He did a damn fine job. I am always amazed when he speaks on the phone, understands and actually enjoys talking on the phone. He never did with hearing aids, it was taboo.

My little man goes with my stepfather to work every Sunday morning and makes ten bucks. Two years ago the going rate was five bucks, but on the flight over I prepared him to ask for a raise, he got it. So now, he's the big moneymaker of the family.

Anyway, I got the kids a large pizza and 100 game tokens that ran out after about an hour, so unbeknownst to me, Jordan went to the cashier and got ten dollars worth of tokens. The next thing I know, because I was trailing behind Sofia the entire time, he walked up to Sofia and put about twenty tokens in her cup.
He GAVE her tokens!!!!

I do believe that that was one of my proudest Mamma moments ever lived.
Love that generous boy.

Anyway, we are partying in the US of A and my mom is still alive!
Posted by Unknown at 4:21 PM

You live in Tuscany! How marvelous. I am in love with the places I have never been. Your son and daughter sound a lot like my children!

Good thought thanks for sharing.....

Hello People, I was on a holiday for a month just passing by read this interesting post its great to see that every thing here is getting more lively...thanks a lot for these keep them coming....