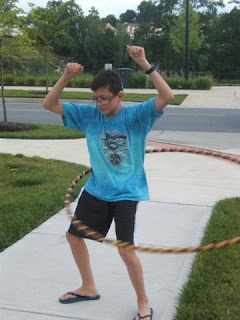 Someone please help me, my son is now officially a TEENAGER!!! And I must say, he seems to have the attitude part to go along with the age. THIRTEEN!!!!! I am the mother of a THIRTEEN year old!!!! And I am praying that people will start mistaking me for his older sister or I may just have a pre-midlife crisis.

Today was an interesting day. We picked my mom and step-father up from the airport in Rome and took them to their hotel- my mom's just itching to shop and my step-father's camped out on the beach. Then we picked up Jordan's gift-Wii accessories and game and went to pick up the kids from the mil. I saw my 13 year old son and showered him with birthday loving. He humbly accepted and proceeded to show me the loot accumulated. Not too shabby.

I took a long look at him and would have gotten all teary-eyed, but he started making demands, talking back and insisting that his demands be met. He's been pulling this back-talk stuff a lot lately and it's starting to get on my nerves, also because he'll talk back, realize he's being an instigator and then suddenly say something cute just as I'm tempted to whoop his butt. That floors me and I have no idea how to react. Such an unsettling sensation to be outsmarted by a TEENAGER! His latest thing is, "Mom, let me see you smile!" with this horrifying I'm-messing-with-ya grin on his face. I'm weak.

I'm weak and it's just beginning.

We all went to dinner tonight at the beach, and he spent half and hour complaining that he wanted a candle. I said, "Jordan, you are not having a party tonight, no cake, you'll have it when you go back to school with all of your friends!" (the dreaded summer birthday-how many summer parties can you have when only half the people show up because the other half are away on vacation?)

I tortured him with the "No candle" thing until finally it was dessert time. We were still arguing when there was a sudden and complete blackout in the restaurant. There was a storm blowing up, so I honestly thought the power had gone out. Then a couple of lights went on, this Italian waitress started belting out "Happy Birthday" in Italian like opera-style and the 200 people in the restaurant started singing with her as she brought three scoops of vanilla ice-cream out to Jordan with the three candles I had given her.

Oh God, the look on Jordan's face when he realized it was coming his way! And then came the smile as he proceeded to blow out the candles. When the lights came on, I said, "Jordan, what did you wish for?"
He said, "Who had time to wish? I was scared to death!"

And so we begin the teenage years together...give us strength. lol.
Posted by Unknown at 5:05 PM

Oh Jodi how I feel your pain and weakness and LOVE for the first born and hopefully the strength to make it through the teen years! My son will be 13 in three short weeks and I'm in complete denial ... until his mouth opens. Where has this time gone ... or even better, how can I have a teenager?!? I'm WAY too young (in my perception anyways LOL). I had to laugh at how Jordan says something cute after backtalking and realized that's why I'm getting so many hugs from Ryan lately! lol

Happy Birthday Jordan!! Hope you have a wonderful 13th year!

Tammy, I'm sorry I never met Ryan-I'm sure they would have had fun psping. And you don't look old enough to have a teen:)
Thanks DADDDDDDDDDDDDDDD!!!!

You will survive! Been through one's teenage years and still going through it with the other.