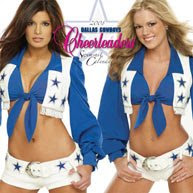 IRVING, Texas - You know those rare moments when it seems the planets are aligned just so perfectly that something magical has the opportunity to take place? I saw it myself when the Dallas Cowboys Cheerleaders made a very special visit to a children's summer camp in the countryside of Celina, Texas. At first glance the camp is typical. The usual stuff, really - fishing, waterslides, games, camp songs. Upon closer inspection, however, you see the camp counselors are actually graduate students at the UTD Callier Center for Communication Disorders and the children wearingt-shirts, shorts and various summer hats share a common accessory, cochlear implant processors. 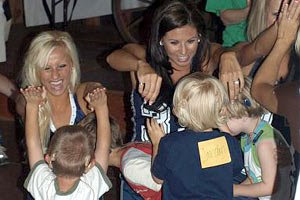 Cochlear implants, in simple terms, are high-tech hearing devices that allow,with a lot of audio and verbal therapy, profoundly deaf individuals the ability to hear and speak. The internal part of the device is surgically implanted behind the ear, while the processor that transmits the sound to the internal implant is usually hooked over the ear. While this is all very high-tech kind of stuff, the kids using them often just refer to wearing their cochlear implant processors as, "putting on my ears."

Why was I there? Well, I share a deep appreciation for both groups as a former Dallas Cowboys Cheerleader myself and now mom to a little cochlear implant-wearing four-year old son, Benjamin. The cheerleaders visited the Camp last year, and I was so proud of their innate ability to connect to the small children with their trademark DCC smiles, bear hugs and captivating personalities. Plus, frankly these ladies know how to access any situation and have fun. It was no surprise that the children were eager to share an afternoon with the Cheerleaders again this year.

As I drove into the camp to greet the six cheerleaders,it occurred to me that these two groups, the world famous, iconic NFL cheerleaders and the little, profoundly deaf children, shared a few things in common. For instance, there isn't a cheerleader on the team that would tell you becoming a member of the Organization was easy or that it happened over-night. They'd tell you there was a lot of workinvolved both physically and mentally. I personally remember there were many gut-checks on the road to wearing the famous uniform.Will I make it through this training camp? Can I possibly rehearse that pregame performance again? How many more kicks?!

Similarly, the children attending the summer camp share the same drive to succeed. No deaf child learns how to speak and hear overnight. There are years of work behind the children's success as well. As a mom to a child with cochlear implants, I see first-hand how hard my son works to achieve the goal of effortless spoken communication through hours of audio and verbal exercises.It can take months for a child to even make sense of the first sound they ever hear with the use of cochlear implants. It's certainly not a quick process. Yet, both groups are passionate about their work.

The other remarkable thing these two groups share is their ability to inspire. When a group needs extra inspiration, the DCC are often called upon. Troops who have been away from home for a long time, children in hospitals, andlonely senior citizens living in nursing homes have been touched by the magic of the Dallas Cowboys Cheerleaders. And so, too, are the inspiring qualities of the children making their way in the world every day with cochlear implants. After all, when I find myself overwhelmed with responsibilities, I look over at my son who, though profoundly deaf, is speaking English without the need for sign language andhas recently begun singing Spanish songs too. It's hard to believe anything is impossible anymore with this "can-do" kid around.

During the cheerleaders' visit to camp, Justine, Makenzi, Abigail, Deryn, Christina and Crystal, helped the children to focus on the different qualities of musical sound, such as rhythm, volume and pitch through dance activities. Then after spending the afternoon dancing, the groups shared hugs, took photos together and each child was given a personally autographed Cheerleader squad-photo to remind them of the special time they spent together.

Justine Phillips, a four-year DCC veteran, explained the significance of being at the camp. "We are so happy to be here dancing with these children. It's so neat because many of them have just begun to hear music for the first time."

According to camp director Melissa Sweeney of the UTD Callier Center, many of the grinning children dancing front and center alongside the cheerleaders were the very same children who up to that moment had been timid and hesitant to participate in some activities.

"I love this. I really do love this," said Klein as she gestured around her to the children dancing. It's not every day that you get to enjoy a room full of profoundly deaf children happily listening to music.

The feeling of appreciation was truly mutual; just days after the camp ended, Ben told me he really liked the cheerleaders. I agreed, "Me too, Ben." Then he added,"I really, really like Abigail...the cheerleader." To further prove his point,in a grand gesture Ben has recently named his favorite toy truck "Abigail" and has since mastered the pronunciation. Now that's true admiration.